When Oil and Water Mix 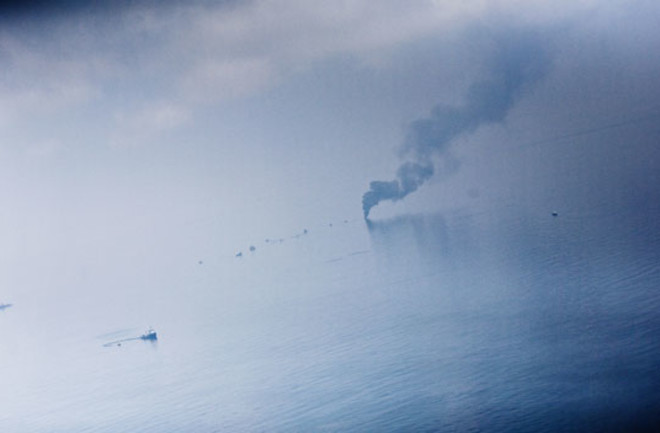 Smoke rises from a controlled burn near the Deepwater Horizon oil spill site, as seen from a U.S. Coast Guard Plane.Mellisa Golden/Redux | NULL

Flying 1,500 feet above the site of the Deepwater Horizon’s explosive oil-well rupture, I found the apparent peacefulness unnerving. I expected swarms of ships and oil-siphoning machines frantically waging war against the tarry sludge. But from my vantage, all I could see was a handful of small boats dragging booms across the water’s surface, dwarfed against a massive backdrop of oily water; also visible were one ship burning gases rising from the blowout and two platforms where relief wells were being drilled. Inside my plane’s cabin, a GPS navigation map in the cockpit flashed “Site of Natural Disaster.” Although the rust-colored slick stretched for miles in all directions, I saw no crews sweeping the ocean between ground zero and Queen Bess Island, a tiny pelican rookery surrounded by bright orange booms.

On land, however, I watched a frenzy of activity as locals prepared to deal with tainted marshes, sickened fish, and tarred wildlife. Frustrated scientists I met along the Alabama coast spoke out against the possible toxicity of the Corexit 9500 dispersant that BP was using to break up the slick. But perhaps my moment of arrival at the Gulf Coast best illustrates the local scene. At the airport in Mobile, the first taxi I called refused to pick me up. In a cool Southern drawl the dispatcher explained they could only transport BP folk. It was clear who was in the driver’s seat.