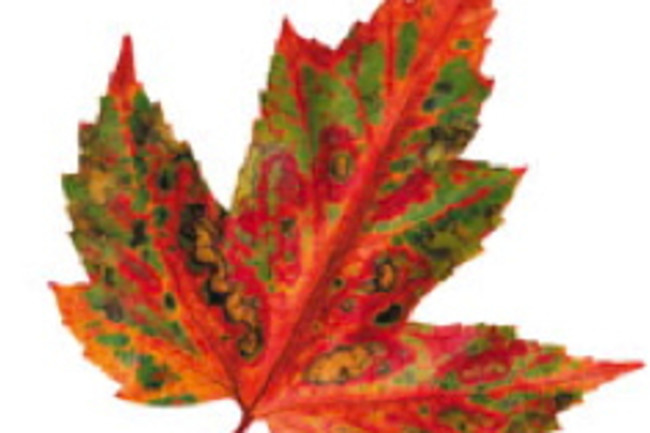 Driving home at the end of the long weekend, I was amazed to see a tree here and there along the road with a touch of orange in its leaves. Fall already. And with fall comes another team of scientists to puzzle over why leaves change color.

I've been following this story for four autumns now, both in the New York Times, and in a series of blog posts (one, two, three, and four). It began with a simple question from one of the great evolutionary biologists since Darwin. William Hamilton argued that it takes a lot of energy for autumn leaves to produce the brilliant pigments that make fall so beautiful. Why bother, Hamilton asked. He suggested that natural selection might favor bright leaves because they might serve as a signal that somehow warded off bugs. A tree with bright leaves might be loaded with toxins, for example. An aphid searching for a place to lay her eggs would do well to avoid red or yellow leaves. Given that trees lose countless tons of biomass to aphids and other bugs every year, there might be a very strong selection pressure for this kind of warning.

Some plant physiologists disputed Hamilton's argument, claming that leaves might well turn pretty colors for entirely different reasons. Red pigments, for example, appear to block damaging photons from the sun as a leaf pumps its nutrients into the tree's branches for winter. And yellow pigments are not unique to fall. In fact, leaves make yellow pigments through the growing season, but they only become visible when the green fades away.

Scientists have conducted some studies to test these hypotheses. They've observed aphids settling on leaves, for instance, and have measured how red the leaves are. In some cases they've argued that the evidence favors Hamilton. But in a charming review in the journal PLOS Biology, Lars Chittka and Thomas Doring of Queen Mary, University of London point out that if trees are in fact putting on a show for insects, it would make sense to understand what exactly the audience is seeing.

In 1950 a scientist named V. Moericke watched how eagerly green peach aphids drilled into surfaces of various colors. Not surprisingly, they were most eager to attack green surfaces, but they ignored red, blue, and grey ones. Something odd happened, though, when Moericke showed the aphids blue or violet, and then switched the bugs to a grey surface. Now they drilled away.

The effect is similar to what happens if you stare at a violet object and then look away--your eye seems to see the shape in a yellow. When receptors in the eye get overstimulated by a certain color, they become less sensitive. Meanwhile, receptors sensitive to other colors get more sensitive. Our brains balance different parts of the spectrum this way so that we can see things as well as possible as the light changes.

But aphids balance light in a different way than we do. They have three kinds of receptors in their eyes. One is most sensitive in the ultraviolet; another is sensitive to blue, and the third is a green receptor. Aphids lack the red-sensitive receptors that humans have. Chittka and Doring offer evidence that aphids see the world as a result of a balancing act between the signals from the green receptors against the blue and UV receptors.

This wiring leads to a strange perception of the world (strange to us, at least). Red leaves, to an aphid, are not brlliant and exciting. They are drab and boring. Green leaves, on the other hand, are far brighter. Ironically, yellow surfaces do an even better job of switching on the green receptors than green itself. That's because yellow is further away from the blue end of the spectrum than green--but not too far away from the green part.

The drabness of red for aphids leads Chittka and Doring to favor the idea that autumn colors are the byproduct of a tree's ordinary business of growing and shutting down for winter. In their review, they don't reinterpret all of the results of the experiments that have been offered in support of the warning hypothesis. So they haven't closed the book. But it is clear now that the mystery of autumn won't be settled until scientists start to look at the world from the bug's point of view.

Update 9/6 10:45 am: A couple readers are puzzled about why, according to Hamilton, trees would try to ward off insects in the last month of the growing season. I should have been clearer here: aphids and other insects look for leaves in the fall tree branches on which they can lay their eggs in the fall. In the spring, the eggs hatch and the new aphids go medieval on the trees. So if trees could keep egg-laying aphids away in the fall, they'd have a better growing season the next year. At least, that's the idea.