What’s behind the swamping of cemeteries in coastal Louisiana? 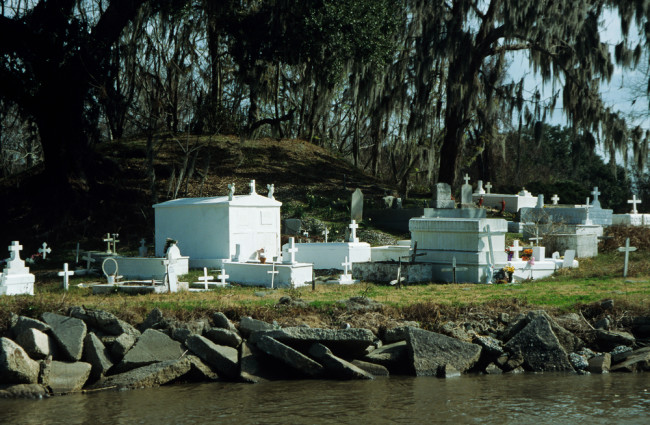 Tom Yulsman is co-director of the Center for Environmental Journalism at the University of Colorado. His work has appeared in a variety of publications, including the New York Times, Washington Post, Climate Central, the Daily Climate and Audubon. Listeners to National Public Radio, and readers of many newspapers, woke up yesterday morning to news that withering wetlands, rising sea level, and raging hurricanes have been causing cemeteries along the Louisiana coast to wash away. Here’s how the Associated Press described the situation:

Now, the cemetery in Leeville is a skeleton of its former self. The few trees still standing have been killed by saltwater intruding from the Gulf. Their leafless branches are suspended above marsh grass left brown and soggy from saltwater creeping up from beneath the graves.

Wetland loss in Louisiana, and the resulting swamping of communities like Leeville, is not a particularly new story. In 2011, for example, a U.S. Geological Survey report

found that the state had lost 1,883 square miles of coastal land between 1932 and 2010---an area almost the size of the state of Delaware. From 1985 to 2010, the report found a rate of wetland loss amounting to 16.57 square miles every year. That works out to the loss of an area the size of one football field every hour. 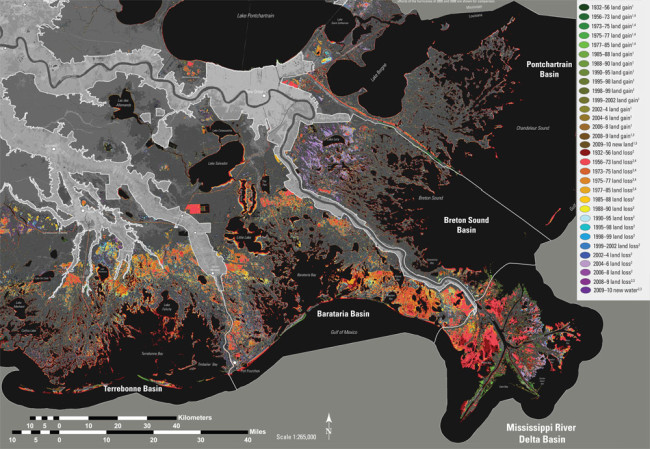 To determine changes in the extent of coastal land in Louisiana, the USGS used 17 different sets of data from 1932 to 2010, including historical reports, aerial photography, and Landsat satellite imagery. After USGS scientists crunched all the numbers, they were able to produce a map depicting changes in land area along the coast. A portion of that map is reproduced here. The town of Leeville, La., featured in news accounts of cemeteries washing away, is marked on the map. The city of New Orleans is toward the top, on the shore of Lake Pontchartrain. The Mississippi River winds across the upper left quadrant, and then turns to the southeast, emptying into the Gulf of Mexico at the lower right. The Mississippi delta has been the focus of a large amount of land loss. “Coastal Louisiana wetlands make up the seventh largest delta on Earth, contain about 37 percent of the estuarine herbaceous marshes in the conterminous United States, and support the largest commercial fishery in the lower 48 States,” according to the USGS report. “These wetlands are in peril because Louisiana currently undergoes about 90 percent of the total coastal wetland loss in the continental United States.” 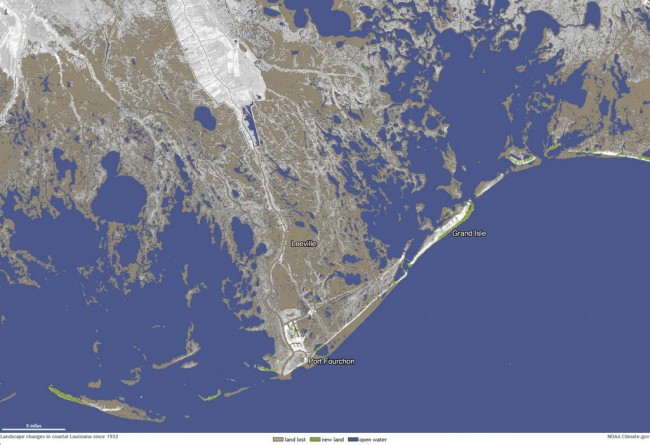 This image from NOAA shows a close up view of land loss in the Bayou LaFourche area of Louisiana. The bayou extends for 106 miles, flowing by the town of Leeville, and then into the Gulf of Mexico by Port Fourchon, a major service center for offshore oil platforms and drilling rigs. Areas colored brown show where land has been lost or converted to open water between 1932 and 2010. Green areas show where new land has been gained, thanks to shoreline revetments, beach enrichment, and other efforts. Lastly, blue indicates open water. (Credit: NOAA Climate.gov) Louisiana’s coastal wetlands began eroding when canals were dug for oil and gas exploration, allowing saltwater to intrude into freshwater marshes and kill them off. The problem was exacerbated by damming along the Mississippi, and construction of levees, which together tended to impede sediment from flooding out into the wetlands and replenishing them. In recent years, coastal Louisiana has taken big hits from strong hurricanes and other extreme storms, causing land loss to accelerate. What about the role of sea level rise due to global warming? The 2007 report

from the Intergovernmental Panel Report on Climate Change put global sea-level rise at about 1.7 millimeters per year over the past century. But along the Louisiana coast, the sea has risen almost 10 millimeters per year, according to the National Oceanic and Atmospheric Administration

. The difference comes from subsidence: The mud of the marshes is sinking under its own weight and is not being sufficiently replenished with new sediment. This makes the coast ever more vulnerable to the impact of storms. 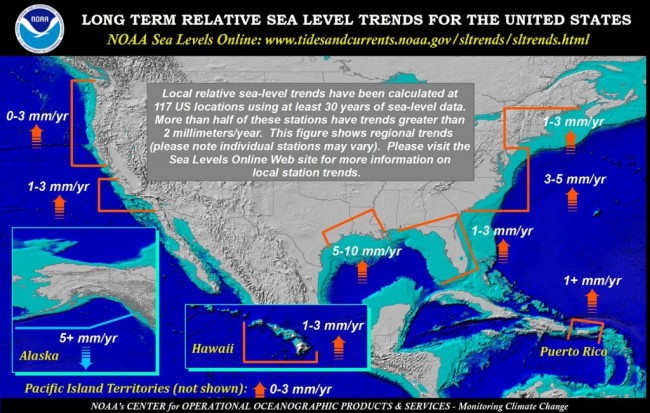 Globally, sea level has risen at about 1.7 millimeters per year over the last century, according to the Intergovernmental Panel on Climate Change. But that global average masks significant local differences. Along the Gulf Coast, for example, sea level rise has been measured at 5 to 10 millimeters per year, with the highest rates in Louisiana. The discrepancy here is due to subsidence of the land, which is in addition to the rise in sea level from global warming. By contrast, along the Alaskan coast, the land is actually rising, resulting in a drop in sea level of about 5 millimeters per year. (Credit: NOAA Climate.gov) Main image copyright AISPIX by Image Source / Shutterstock