What the Frack is Up with Drinking Water and Shale Gas Extraction?

A study out today in the journal Proceedings of the National Academy of Sciences helps to build the case that the practice of hydraulic fracturing, or “fracking,” does indeed pollute underground water reserves.

Researchers from Duke, the University of Rochester and California State Polytechnic University analyzed 141 drinking water wells in northeastern Pennsylvania and southern New York, near the Marcellus shale-gas deposit, where extraction started ramping up around 2005.  They were looking for concentrations of methane, ethane and propane gas that could be traced back to nearby natural gas wells.

They found that of the drinking water they tested in homes less than a kilometer away from a natural gas well, 82 percent had well-related methane levels that averaged six times higher than levels found in homes farther than a kilometer. (Some methane occurs naturally, so researchers teased out the isotopic signatures of methane from natural-gas sources.) 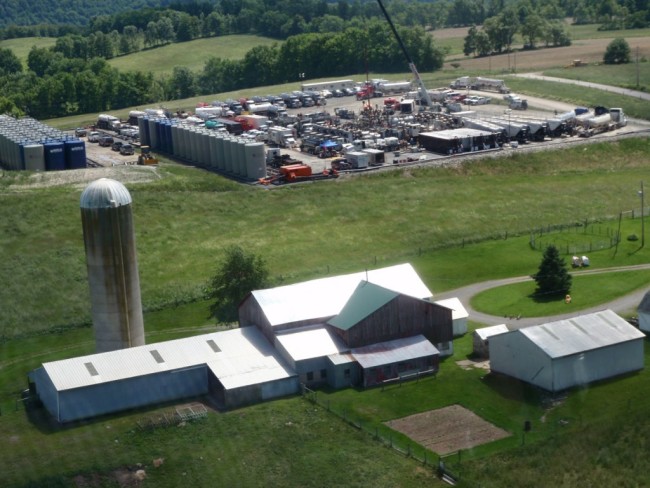 They speculate that natural-gas-well casings may be leaking, and that the geology of the formation makes a difference in terms of what can and can’t migrate to drinking water supplies.

Many people suspect fracking pollutes water in two ways: 1) Extraction is done with the help of chemicals that are designed to keep rock fractures open and wells clean and clear of bacteria, salts, metals and more. Many of these chemicals do not have to be identified because they are proprietary. Some may leak into groundwater wells and some may resurface and ultimately end up in toxic pools that, just like mining tailing ponds, if not managed properly could leak into surface waters. 2) The other concern is that the gas itself will leak into water supplies. It is possible that methane, the main element of natural gas, can seep out of natural gas wells into drinking water wells when the seals on the gas wells fail. The methane itself is not considered a health hazard, but can reduce oxygen and that it turn can increase the solubility of arsenic and other potentially harmful substances. Or in rare cases it can cause explosions.

Previous studies on water quality and fracking have come up mostly blank. I wrote about a paper in a May issue of Science that also looked at the Marcellus region and basically concluded that we still know very little about the link between water quality and hydraulic fracturing.

The U.S. Environmental Protection Agency has a report due out in 2014 on the relationship between the two, but in the meantime has stepped away from confirming whether or not fracking led to groundwater pollution near Pavillion, Wyoming, in 2011.  Their original findings there were some of the only other data points bridging extraction to contamination.  Instead of pursing the investigation itself, the EPA has turned it over to the Wyoming Department of Environmental Quality and the Wyoming Oil and Gas Conservation Commission.