A new and improved portrait of the home planet, photographed by the Himawari-8 weather satellite in geostationary orbit 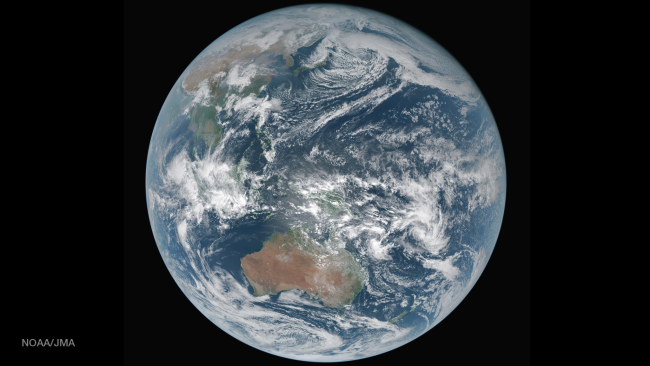 True-color image of Earth from the Himawari-8 satellite in geostationary orbit. (Source: NOAA/JMA) I don't know about you, but I never tire of high-resolution images like this one from the Himawari-8 satellite showing the entire disk of our home planet. It's a new and improved version of a now-familiar view. So make sure to click on the image to open it in a new window. And then click on it again to zoom in. This true-color portrait of Earth was photographed by Himawari-8, operated by the Japan Meteorological Agency, on February 10, 2016. The lovely, natural rendering was made possible by a new processing method called the Simple Hybrid Contrast Stretch (SHCS), developed by the University of Wisconsin Space Science and Engineering Center and NOAA. The advanced imager on Himawari-8 can view Earth in more than just visible light. Sensitive to 16 different wavelengths overall, the Advanced Himawari Imager also operates in the near-infrared and infrared parts of the spectrum. For visible imagery, the AHI has a resolution of 500 meters. If I've done my math correctly, that means it can resolve features as small as about five typical city blocks. If that doesn't sound terribly impressive to you, consider that the resolution of the imagers on the current GOES weather satellites, which are operated by NOAA and cover the United States, is 1 kilometer. So Himawari-8 is a huge improvement. It also gives us a preview of what we'll be getting from NOAA's GOES-R satellite, which is scheduled for launch in October 2016. Like Himawari-8, its resolution in the visible end of the spectrum is as fine as 500 meters.

SEE ALSO: Here’s the powerful storm that a Royal Caribbean cruise ship literally blundered into — as seen from space

I included the link above because that story highlights another advantage that GOES-R will have once it comes online: It will be capable of returning one image of the Earth every minute, as opposed to every 15 minutes for the current GOES-13 and GOES-15 satellites, and every 10 minutes for Himawari-8. https://www.youtube.com/watch?v=ggKun-D7ywI Already, though, Himawari-8 gives us views of Earth more stunning than we've had before, as the image at the top of this post shows. And when its images are strung together in animations, the result is a breathtaking sensation of a living, breathing planet. For a sense of that, make sure to watch the video above. GOES-R will be even more breathtaking. As an unapologetic weather and remote-sensing geek, I can't wait.