Why glaciers melted millions of years ago might tell us something about what’s happening today. 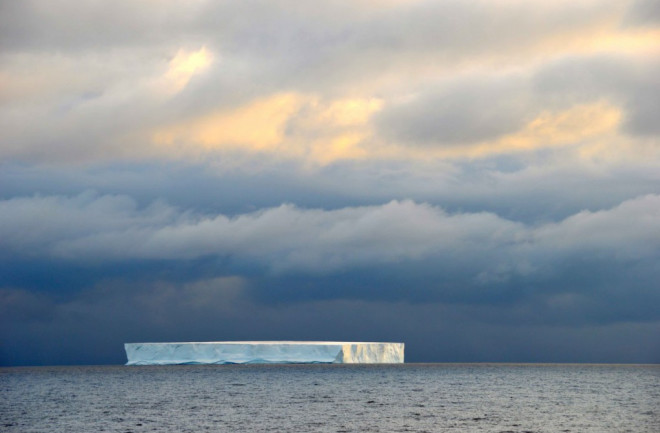 The JOIDES team snapped this image on their transit through the ice near Antarctica. (Credit: JOIDES Resolution/Twitter)

Earlier this week, an international team of geologists and climate scientists parked their ship off the coast of West Antarctica and started drilling. Their mission: To find out why glaciers here melted millions of years ago and what that can tell us about what’s happening today.

Over the next couple months, their ship, the International Ocean Discovery Program’s JOIDES Resolution, will drill at least five core samples reaching thousands of feet below the Ross Sea. These cores will let scientists read layers in the rock record like pages of a book, unraveling climate and ice conditions stretching back tens of millions of years.

Amelia Shevenell is the project’s mastermind. The University of South Florida expert in ancient climates has worked for years on proposing and planning the expedition.

“This expedition is really exciting, and particularly to me because I’ve been working on it for 10 years,” says Shevenell.

In that time, scientists have become increasingly confident that warm ocean water from more northern climes is washing up toward the coast of Antarctica and finding its way beneath these ice sheets, melting them from below. That’s causing coastal glaciers, like Pine Island in West Antarctica, to retreat irreversibly, losing hundreds of feet each year. And these glaciers act like a stopper, holding back inland glaciers. Once they melt, the whole West Antarctic Ice Sheet is at risk of collapsing.

Every day from now through early March, Shevenell and her colleagues will work a 12-hour shift. Drill staff will pull up cores from the ocean depths and hand them off to scientists for examination in the ship’s laboratory.

As the cores come in, Shevenell says she’ll be looking for changing rock sizes. Pebbles and gravel are deposited near a glacier’s grounding line — the point where it meets the sea. So when scientists see layers of those small rocks, they’ll know glaciers reached their drill location at that point in history.

Layers of gray clays indicate the sediments formed beneath a large floating ice shelf. And when Shevenell sees tiny marine creatures through the microscope, she knows the region was open ocean at that point at that time — devoid of ice. These microscopic marine animals can also reveal details about the environment, like temperature.

She’ll even be looking out for pollen, because before the ice sheets, Antarctica was a big rain forest covered in tree ferns. Ice overtook the continent between 50 and 34 million years ago. Scientists are still debating why that happened.

About 34 million years ago, Tasmania and South America broke away from Antarctica, leaving the continent isolated. That kick-started what’s called the Antarctic Circumpolar Current — a vast current of cold waters that walled the continent off from more tropical heat.

But atmospheric carbon dioxide levels were also changing around the same time, leading some to believe that greenhouse gases were the main cause of Antarctica’s icy shift.

Shevenell suspects both changes played a role, but she’s hoping to add more evidence to the scientific debate.

However, the most intriguing time — the period that matters most to us today — scientists hope to explore in the rock record is between 7 and 14 million years ago. It’s a period geologists call the Miocene. Earth’s temperature and atmospheric CO2 levels were similar to what we’re experiencing today, and yet Antarctica was going through significant changes.

“At that time in Antarctica, the ices retreated pretty significantly and caused sea level rise,” Shevenell says. Scientists don’t fully understand what drove those changes. But Shevenell has a hunch.

“I have a sneaking suspicion that this ice variability will be related to ocean changes,” she says.

The IODP team should have a better idea later this year. Once the collections efforts are over, the team will bring the cores back to land for more intensive study.

This one trip can’t provide all the answers, but Shevenell says it’s one of a handful of drilling expeditions set to happen around the continent over the next several years. By combining snapshots of ancient ocean temperatures and glacier locations over time, scientists can better map out the continent’s icy history — and get a fuller picture of why its glaciers retreat and expand.

“We’re going to begin to understand a lot more about Antarctic ice sheets and how they respond to atmospheric and oceanic changes,” she says.