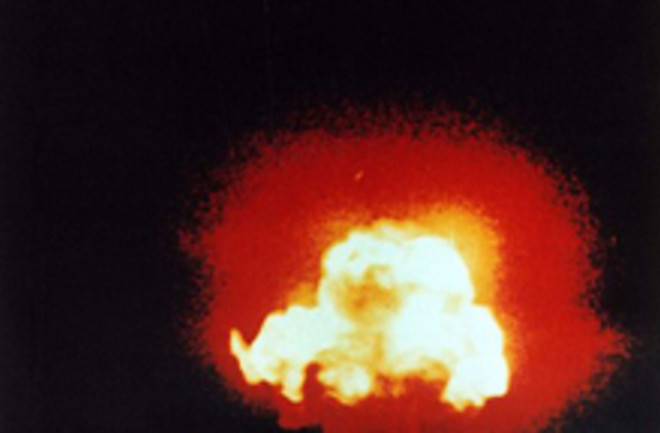 Here's one direct and obvious effect of the economic stimulus package passed in February: The toxic sites where scientists ushered in the nuclear age are getting cleaned up. In Los Alamos, New Mexico, a dump that contains refuse of the Manhattan Project and that was sealed up decades ago is finally being explored, thanks to $212 million from the American Recovery and Reinvestment Act. But experts aren't sure what they'll find inside the dump.

At the very least, there is probably a truck down there that was contaminated in 1945 at the Trinity test site, where the world’s first nuclear explosion seared the sky and melted the desert sand 200 miles south of here during World War II [The New York Times].

It may also contain explosive chemicals that could have become more dangerous over the years of burial. While the Los Alamos dump was alone on a mesa when it was established in 1944, the town has since grown up around it. Today several businesses are across the street from the site, so experts took extra precautions before starting the remediation effort.

The team members pored over wartime classified documents and interviewed old-timers to learn what materials might have found their way into the dump, and took soil samples to test their estimates of how much plutonium might be buried there. They debriefed a laboratory worker who, as a young man, once fell into it [The New York Times].

Stimulus money has also gone to other facilities that worked on nuclear weapons. About $1.9 billion has gone to the Hanford site in Washington, where an earlier stage of the cleanup unearthed a metal safe with a glass jug inside. Inside that jug was plutonium left over from the first batch of weapons-grade plutonium ever made. Another batch of Hanford plutonium was used in the nuclear bomb that fell on the Japanese city of Nagasaki. Another $1.6 billion has been dedicated to cleaning up the Savannah River site in South Carolina, where nuclear materials were processed in the 1950s. Related Content: 80beats: The “Dirtiest Place on Earth” Still Has a Lot of Nuke Waste to Clean Up 80beats: Should Yucca Mountain Hold More Than 77,000 Tons of Nuclear Waste, or None? 80beats: EPA Sets Radiation Limit for Nevadans Living 1 Million Years From Now DISCOVER: End of the Plutonium Age dives into the enduring mysteries of plutonium DISCOVER: Bombs Away explains how to dismantle a nuclear warhead Image: Department of Energy. The Trinity test was the first test of a nuclear weapon.