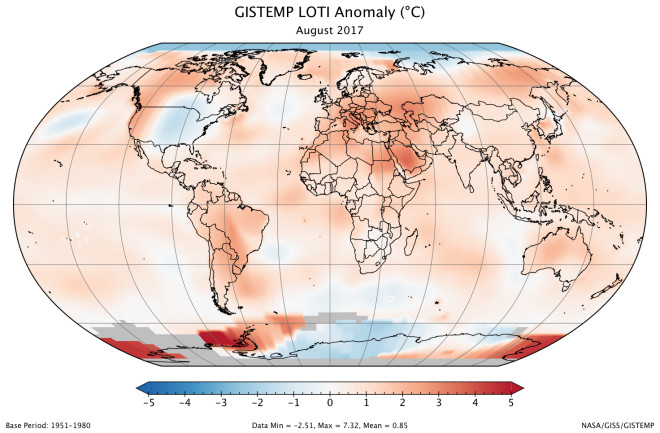 A global map from NASA of how Earth's surface temperatures last month departed from the 1951-1980 August average. (Source: NASA GISTEMP. Note: part of Antarctica is gray because data from some stations there were not yet available at the time of this analysis.) Last month was among the very warmest on record, according to two new analyses – and the heat is very likely to continue. With less than four months left to go in 2017, the year will probably come in as second or third warmest on record. Two agencies have produced very slightly different verdicts for this past August. NASA's Goddard Institute for Space Studies has found that last month was the second warmest August globally in 137 years of modern record-keeping, surpassed only by August 2016. Global temperatures last year received an extra boost from a strong El Niño episode. Meanwhile, NOAA's National Centers for Environmental Information found that last month was third warmest, behind August 2016, which was first warmest, and August 2015, second warmest.

The trend in how global temperatures have departed from the long-term mean, through Aug. 2017. The base period here is 1880-1920 in order to show the magnitude of warming relative to pre-industrial time. (Source: Makiko Sato, Columbia University) The difference between the two analyses really is quite small. NASA estimated that last month brought temperatures 0.85 degrees Celsius warmer than the long-term mean. In its independent analysis, NOAA pegged it at 0.83 degrees C warmer. "The measured value is consistent with the trend in global average surface temperatures that has been observed during the past few decades," NASA noted. Relatively cool conditions in the Arctic – see the blue tones in the global map at the top of this story — helped tamp down the global average in August. These conditions persisted into September, helping to limit the loss of sea ice in the high north.

SEE ALSO: After shrinking to a shocking record low at end of winter, Arctic sea ice staged a modest comeback this summer

Given where we've already been this year, here is where we are almost certainly headed: https://twitter.com/ClimateOfGavin/status/910226137162420225 As his Tweet above indicates, Gavin Schmidt, the head of NASA's climate monitoring efforts, predicts that there's a greater than 80 percent chance that 2017 will come in as the second warmest year in records dating back to 1880, to be surpassed only by 2016. NOAA is forecasting that 2017 will come in as third warmest year.