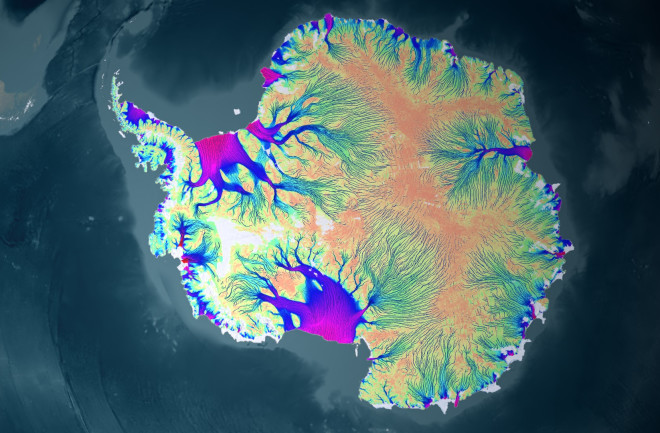 Based on satellite data, this is the first complete map of the speed and direction of ice flow in the Antarctic. The lowest velocities (oranges and yellows) are about 1,000 times slower than the fastest ones (purples and reds). Click the thumbnail in the text below for a map with the major ice sheets labelled. Also: See below for an animated visualization. (Source: NASA/Goddard Space Flight Center Scientific Visualization Studio) Yesterday, I described new research suggesting that the West Antarctic Ice Sheet may be in the early stages of irreversible disintegration and melting — something that could eventually raise sea level by more than 10 feet. Today, I'd like to share the perspective of scientists who weren't involved in the research.

Wikimedia Commons In my post yesterday, I said I thought the new findings would eventually come to be seen as historic. This might seem odd, given that the research shows that it would take a minimum of 200 years for the ice sheet to begin a rapid phase of disintegration. But I also pointed out that on a geologic timescale, centuries represent a veritable blink of the eye:

. . . in a blazing flash, geologically speaking, we humans are managing to remake the life support systems of our entire planet. This is why I think today’s news may eventually be seen as having historic significance.

But I was also curious to see what experts who have been researching the Earth's cryosphere and climate for a long time have to say on this question. So I emailed about a half dozen of them. So far, I've heard from four, and I'll include their responses below. But first, check out this stunning animation showing the speed and direction of ice flows in Antarctica. It makes the still image at the top of this post come alive:

With that as visual background, here was the question I posed to the scientists in my email:

I'm writing to see whether you have any thoughts on the significance of the trio of papers that have come out about the apparently unstoppable disintegration of at least a large portion of the West Antarctic Ice Sheet . . . My own first reaction was that this will eventually be viewed as an historic moment. But maybe I'm being overly dramatic. I'm wondering what you think.

Waleed Abdalati, director of the Cooperative Institute for Research in Environmental Sciences here in Boulder, was one of the scientists who responded. Waleed has served as Chief Scientist of NASA. His research involves the use of satellite and airborne remote sensing techniques, integrated with observations and modeling, "to understand how and why the Earth's ice cover is changing, and what those changes mean for life on Earth." He was concise in his response:

Hi Tom, I have only glanced at the papers, but I would characterize them as providing evidence of something we thought was happening, but just did not observe or quantify. So is it significant? Yes, in the sense that it shows what we thought/feared was happening. Ted Scambos will probably have a more informed opinion, since his work is more closely tied to this region. But I do think that taken together, this is a big story, -Waleed

I agree with you Tom, I think it is a significant turning point, and it comes at a time when the public view appears to be shifting a bit - we are 'in' global warming now. You could argue that scientists felt this way more than a decade ago (esp. polar scientists) but the advent of Sandy, the 2012 record Arctic low ice extent and intense Greenland melting, and the steady drumbeat of results pointing toward climate and ocean effects has I think reached much of the public. Moreover, I think the policymakers (govt agencies, not politicians) are increasingly simply 'getting on with it' in terms of preparation and infrastructure to both adapt to, and combat, anthropogenic climate change. On the science of the studies -- it is a rare combination of events, observations, and modeling advances that have come together to generate this level of impact -- the Antarctic has entered an irreversible phase of ice mass loss. While it's true that what we're talking about is a slow-motion roller coaster of 500 years' duration, we nevertheless have the sobering realization that we just bequeathed a rising ocean to a dozen generations. And we can look at the first one or two right now. Standing next to us. We are going to seem like total idiots to them when the transition to solar-wind-hydro-geo, and conservation, takes hold.

I'm not sure that we'll look like total idiots — after all, the current generations have been slowly laying the technological groundwork for this transition. But we've done it too slowly to avoid being, as Ted put it, "in global warming now." We are, in a very big way. As the findings announced yesterday show quite dramatically, it's too late to avoid that. One of the first scientists I thought to ask about these issues was Eric Steig, an earth scientist at the University of Washington who conducts research into past environmental changes with the goal of understanding contemporary and possible future change. Eric sent back a long and detailed response; I'll include what I think are the most pertinent parts, along with some explanation of some of the technical details. Here goes:

Both papers are great and impressive. I do agree with you -- I think 50 years from now we will look back and say "yup, we were sure of this already in 2014; why didn't we do anything?", because of these papers. Having said that, I am not yet convinced by the "unstoppable" argument. Ian Joughin's work shows that advance could occur if major reductions in the melt rate under the glaciers were to occur. This indeed happened in 2012 due to a very large La Niña event (see Dutrieux et al., 2014).

Ian Joughin's paper is one of two that were made public yesterday. And Eric is pointing out here that the Thwaites Glacier, one of six that flow off the West Antarctic Ice Sheet into the Amundsen Sea, could stop receding and begin to advance if melting that's now occurring beneath its floating ice shelf were to slow down — as it did back in 2012. Steig continues:

Having said THAT, I would not take bets on my being right here. The chances of favorable winds persistently occurring such that the circumpolar deep water no longer flows onto the shelf and melts the ice is small. Not zero, but small. It would probably require the planet to go into a pretty much persistent La Niña phase; all the models suggest something much more like El Niño in the future. So, while the scientist in me says "I'm not so sure about this", my educated guess is, yes, the "collapse" has begun.

Steig is talking here about a change in wind patterns that could help prevent deep, relatively warm water that circles Antarctica from flowing into the Amundsen Sea Embayment, an indentation in Antarctica's coast where glaciers of the West Antarctic Ice Sheet flow out into the sea. Right now, this flow of warm water is causing the undersides of these glaciers' ice shelves — their floating portions — to thin. And this, in turn, is helping to promote the process of disintegration. The warm water is reaching the glaciers because of increases in westerly winds. Some researchers have attributed this to the ozone hole that occurs in Antarctica each winter. But in his email Steig said recent research shows something else is to blame: the temperature of the sea surface in the tropical Pacific Ocean. And that's where the connection to La Niña and El Niño comes in. These are opposite sides to a climatic coin. El Niño is the warmer side (and we appear to be entering one right now). The phenomenon is associated with unusually warm sea surface temperatures in the equatorial Pacific. During El Niño years, global average temperatures tend to be higher than in neutral years. During a La Niña, the opposite is true. (And both have significant impacts on

weather around the globe.)

With that as background, Steig's main point comes into view: As we humans continue to warm the Earth through our emissions of greenhouse gases, climate modeling suggests that warming of the central tropics will be particularly pronounced. That's like an El Niño condition, not La Niña. And that's why Steig believes the current wind conditions that are bringing the warm, destabilizing water to the glaciers of the West Antarctic Ice Sheet, are likely to persist. For a perspective from a different scientific discipline, I contacted Kevin Trenberth of the National Center for Atmospheric Research. Kevin doesn't study ice sheets. He specializes in global energy and water cycles and how they are changing. In his response, he said he had not yet had the time to read the papers on the West Antarctic Ice Sheet collapse.With that in mind, I won't include his entire email here. But this portion I thought was quite relevant:

We have increasing evidence that some of what is going on in the Arctic and Antarctic is related to internal (natural) variability rather than climate change, very much associated with the so-called hiatus in global mean temperatures, and the patterns associated with that, which relate to the PDO [a climatic phenomenon known as the Pacific Decadal Oscillation]. I have an article submitted to Science related to that aspect. So it is easy to over-estimate the effects of climate change.

I emailed him back and said that regardless of the possible impacts of natural variability, increased westerly winds, etc., "we are continuing to add heat to the oceans, correct?" And so while all sorts of natural factors not yet fully understood could serve to slow things down, won't the inexorable build up of heat likely lead to eventual disintegration of the ice sheet? He answered 'yes' to both questions. One message that I take away from these exchanges is that the cartoon caricatures of climate scientists advanced by many skeptics are very far from the mark. If we are to believe these skeptics, many climate scientists are either fire-breathing activists motivated by a political agenda and a greedy hunt for research funding, or an uncritical pack motivated by groupthink in ways that hopelessly skew their science and make it untrustworthy. What I see are people who are struggling to understand one of the most complex scientific questions of all time. I also see skepticism and questioning, and some honest disagreement at the cutting edge of this scientific field. But I also see general agreement on the big picture: We humans have already altered the climate system in a very big way that will eventually remake the outlines of our world. That may happen a bit sooner than some think, or later than others do. But the changes are already underway. As Ted Scambos put it, "we are 'in' global warming now," and "we just bequeathed a rising ocean to a dozen generations."