We're All a Little Plastic on the Inside 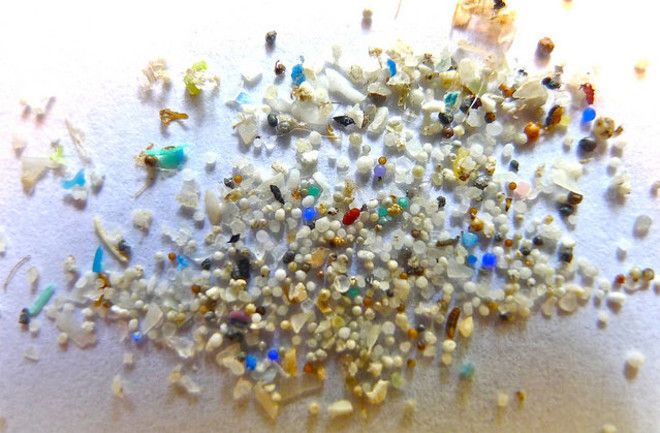 Microplastic beads. (Credit: 5Gyres/Oregon State University) You're made of water, bone, blood, muscle and fat; you're also a few parts plastic. That is, if you prefer sea salt on your meal. Or honey, shellfish, beer or tap water. Recent studies have found microplastics, tiny shards of degraded plastic, in them all. Even the air is filled with the minuscule plastic bits.

Hold off on the panic though; it's still too early for researchers to say what the effects of microplastic consumption are, although preliminary studies in animals suggest that they can certainly cause harm. In humans, though, it's a bit harder to study because nearly everyone has microplastics in their bodies, so there's no control group for comparison. The pieces themselves seem relatively benign — they're just tiny bits of plastic, looking in large quantities like so much sand, created as larger plastic objects gradually degrade. NOAA defines a microplastic as anything plastic under 5 millimeters — large enough to see easily with the human eye, although many can be microscopic. Most are small enough to pass through the digestive system without causing harm, but they can also hold on to and deliver pollutants inside our bodies, something the animal studies supported. There's been evidence that microplastics have been infiltrating our bodies for a few years now: A 2013 study found them in German honey and sugar, 2014 saw them pop up in some shellfish and beer, and in 2015 they were found in Chinese table salt and took to the air in Paris. The latest such research also examines salt — an April study found microplastic particles in 16 of 17 brands of sea salt, and a recent Guardian article details more work in the same vein.

In most cases, the levels of microplastics were quite low — with the notable exception of shellfish. Regular and even excessive consumers of salt, beer and honey will only ingest a few thousand particles a year at most from those sources, and we'll never notice their fleeting passage. The point though, is that these products come from very different places, which is an indication that microplastics are far more pervasive than we might think. Plastic in the air brings new concerns as well, as it can enter the lungs and spread through the environment more readily. And those shellfish? The study found the average European could consume up to 11,000 pieces of microplastic from them annually. Although the impact of microplastics on our health aren't settled, their ubiquity is a growing concern. It will likely only get worse, too. A July study found that humanity has produced some 9 billion tons of plastic so far, the majority of which has ended up as trash. We're on track to have thrown around 13 billion tons away by 2050, and that will only translate into more microplastics. An international team of researchers estimated in 2014 that there are around 5 trillion pieces of plastic floating in the ocean, weighing 250,000 tons. Bit by bit, it will break down and make its way back to us.