Two smaller stories combined to make this weekend interesting. Saturday, Nancy Pelosi presented her compromise version of an energy bill permitting offshore drilling. Even Obama has been publically supporting offshore drilling these days, and the general consensus is the GOP's been gaining some fans by saying, we drill offshore, your gas prices go down. Tellingly, the part of the compromise bill the GOP got huffy about was the repeal of tex credits for oil companies. They hold it down for their friends, consistently. 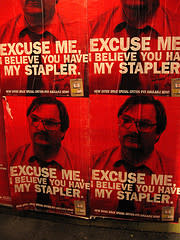 The bright spot is more and more info circulated about the new animated comedy series about environmentalists by Mike Judge (the man who brought us Office Space). It's called The Goode Family. It's airing in November, and apparently the dog kept on a vegan diet attempts to eat other pets. Judge has hired the two King of the Hill writers who wrote Blades of Glory, a decision I support; a script that drops a reference to the Detroit underground figure-skating scene reflects the correct sensibility for lampooning my demographic. Image: flickr/fluzo

HealthWhat Is Inflammation, and Why Is It Sometimes 'Bad' for Your Health?
Recommendations From Our Store