We Pump Water From Underground. It Flows to the Ocean. The Oceans Are Getting Deeper. 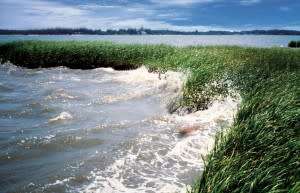 , but could it cause sea level to rise on a global scale? Yes, according to a model published

in Nature Geosciences, that attributes 42% of the sea-level rise over the past half century to groundwater use. Ninety percent

of readily available freshwater is underground, and water used for drinking or crop irrigation must, of course, be brought above ground. That water then evaporates or flows into rivers, entering the water cycle and eventually the oceans, making them deeper. Sea levels rose by 1.8 millimeters per year in the last half of the century, but calculations of the contribution from melting ice and rising sea temperatures (which causes water to expand) accounted for only 1.1 millimeters of that. This new model found that the remaining sea-level rise could be explained by groundwater depletion. Some more data is needed to prove the link conclusively, but it suggests that the global consequences of groundwater deserve a more serious look. [via Nature News