We just had our 2nd warmest March, and with El Niño maybe rising from the dead, things could get interesting 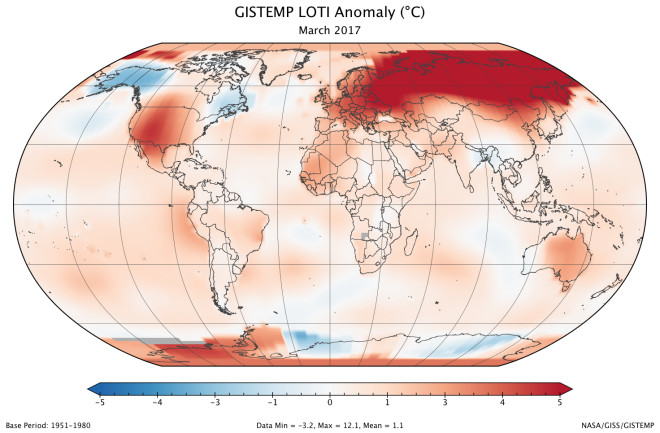 This map shows how temperatures varied from the long-term mean in March 2017. Europe and all of Russia were again much warmer than the 1951-1980 base period. Much of the United States was also relatively warm, but Alaska was cool. (Source: NASA GISS) The home planet just experienced its second warmest March on record, according to an analysis released by NASA last week. The agency's temperature records go all the way back to 1880 From the analysis:

Here's how the year so far compares with the seasonal cycle for every year since 1880:

Source: NASA GISS It's still early in the year, but so far 2017 has mostly been second warmest among all years on record. And now, there are signs that a new El Niño may be stirring in the tropical Pacific.

SEE ALSO: Say, WHAT? After one of the strongest El Niños on record, another one maybe be brewing

El Niño is associated with warming temperatures in the tropical Pacific, as well as global weather impacts. The monster El Niño that finally dissipated in 2016 helped boost global temperatures already running significantly warmer than average due to human-caused emissions of greenhouse gases. The year smashed the previous mark for warmest on record.

SEE ALSO: Climate change in 2016 — and continuing into 2017 — has brought the planet into "truly uncharted territory"

Will another El Niño form and cause a similar effect this year? It's still too soon for scientists to say. We should know more in another couple of months. Meanwhile, it's patently obvious that over the long run, there has been no global warming slowdown. Check it out for yourself:

This graph shows how temperatures have varied from a base period of 1880 to 1920, through March of 2017. (Source: Makiko Sato, Columbia University via NASA GISS) As the graph shows, yes, there are ups and downs in global temperature, but if you can't see the overall trend — particularly since about 1970 — well, what more can be said? As greenhouse gases continue to rise unabated, and heat keeps on building up in the climate system, the risk of passing tipping points in the system increases, according to James White, director of the Institute of Arctic and Alpine Research at the University of Colorado. The record of past climate changes in Earth's history provides some hints of what could happen, but the insights are limited because those changes played out over long time periods than the ones we are causing. "We are going into somewhat uncharted waters from a warming point of view," White says.