We Could Have Contained California's Oak Tree Epidemic 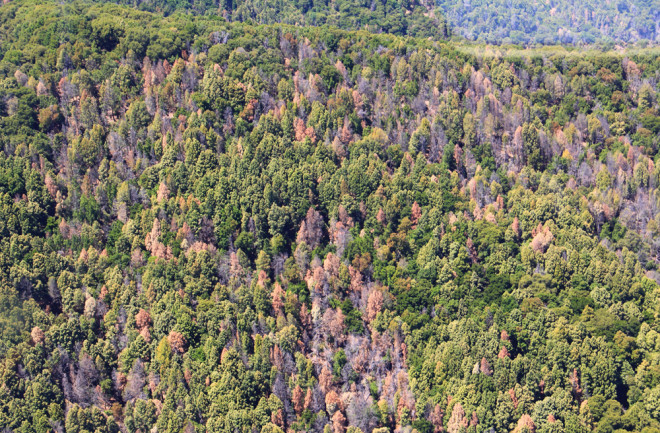 The effects of sudden oak death are clearly visible above Mescal Ridge in Monterey County. (Credit: California Oak Mortality Task Force) There's a deadly disease ripping through Northern California right now, leaving millions of dead trees in its wake. There's nothing we can do to stop it now, but we could have. So-called "sudden oak death" is a disease caused by the plant pathogen Phytophthora ramorum, which is related to the menace that caused the Irish potato famine. The scale of destruction stemming from the disease seems to have surpassed what lawmakers in the region expected, and the time to fight back has long since passed: According to a new study, 2002 was our last chance to turn the tide.

Using disease models similar to those used to track human pathogens, a team led by researchers at the University of California-Davis examined how sudden oak death has spread in order to predict what's coming next. The results are grim: Even if we were to wage a full-scale campaign against the disease today, researchers' models suggest P. ramorum could still devastate forests along the West Coast, putting billions of trees at risk. They published their work Monday in the Proceedings of the National Academy of Sciences. P. ramorum is a water mold that infiltrates oak trees through their bark and usually kills them within one to five years. The pathogen targets the tree's cambium — the layer between the wood and bark — decimating its vascular system. The disease is spread by natural forces, such as rain, but also by humans — the nursery industry is a major culprit. Many species of trees can act as carriers of the mold, but won't show any symptoms.

The researchers say that it was first detected in 1995, and likely entered the United States via imported ornamental plants, but the pathogen's native range is still unknown. The best option to fight back is by preemptively cutting down oak and other disease-carrying trees that straddle the borders of infected areas, creating a firewall of sorts that the pathogen can't leap across. Wildlife officials in Oregon had some success with slash tactics when the disease breached the state's borders, according to a co-author of the study, David Rizzo, who specializes in plant pathology at UC-Davis. But it was too little too late, he says, and the disease went on to spread despite their efforts.

Even if we were prepared back in 2002, containing the disease would have required a massive effort, partly due to the fact that sudden oak death takes a while to manifest in trees. But when it does, it kills them quickly. "It took five years to really recognize what was causing the tree mortality," says Rizzo. "And then we had to work out what the epidemiology was. But then we would have had to put money into monitoring and surveillance to [find] where the pathogen is. Add to that the cost of removing infected trees and trees that spread the pathogen. It would have taken a massive effort, even then, to completely stop the spread of the pathogen."

The signature weeping of a tree with a Phytophthora ramorum infection. (Credit: Ken-ichi Ueda/Flickr) In the study, Rizzo and his colleagues provide estimates of how far the disease will expand, accounting for a range of scenarios. The biggest factor, they say, is money. Even if the California Department of Forestry and Fire Protection were to devote its full 2015-16 budget of $90 million to the cause, the state would still stand to lose roughly 9,000 square miles of oak forest. Starting ten years ago with the same amount of resources would have resulted in almost 5,000 square miles being lost, according to estimates. In California's savannas and woodlands, oaks often serve as "keystone species," which means they support entire ecological communities of other plants and animals. Some 300 different animal species in California live in habitats dominated by oaks. Losing the trees could substantially alter the state's biological diversity.

Learning to Live With It

Now, Rizzo says that we have to focus on living with and managing the disease. This includes restoring areas that have been hit, removing trees that spread the disease and restoring beneficial wildfires to the region. Ultimately, it is too late for the oak trees, they say. If anything, Rizzo says that this case should serve as an example for future epidemics. He emphasized the key roles preparation and early detection play in fighting infectious diseases, a fact made plain by the exponential rate of loss the researchers detail in their paper. "A lot of the modeling techniques we've used in this paper are also used in human and animal pathogens," says Rizzo. "And the lesson is hit these things early, which oftentimes is difficult for policymakers." He cited the intense government reaction to the H1N1 virus in 2009 and the relatively muted reaction to Ebola in 2014 as examples of the fine line officials must walk when deciding how to allocate resources to combat disease. The fate of the oaks may be grim, but they impart a final lesson as they fall: Don't wait until it's too late.