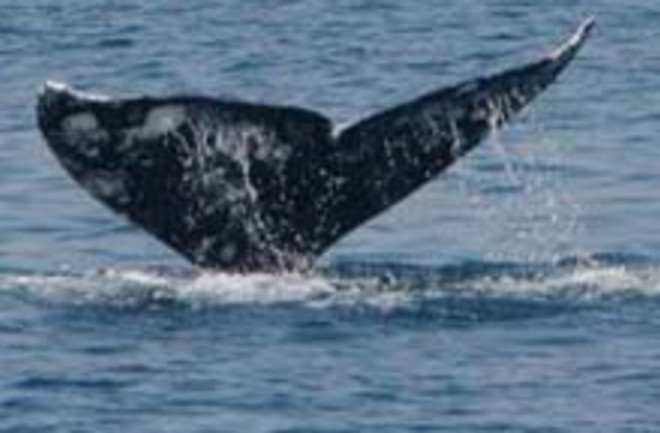 There are about 20,000 gray whales living in the eastern Pacific Ocean today, plus another 200 in a small group in the western Pacific. And, in the Mediterranean Sea, scientists have found one. Over the weekend, oceanographers saw a solitary gray whale cruising the Mediterranean off the coast of Israel. To say they were surprised would be a vast understatement: gray whales haven't lived in the Atlantic Ocean or the Mediterranean since their population crashed in the 1700s, possibly because of whaling operations. Yet today a solitary gray whale swims by the shores near Tel Aviv, halfway across the world from where the rest of its species resides (the researchers say they photographed the animal to be sure it wasn't a different species, like sperm whale). So what happened to get this whale to the far side of the world? Says Phillip Clapham of the US government's National Marine Mammal Laboratory in Seattle:

"The most plausible explanation is that it came across an ice-free North-West Passage from the Pacific Ocean, and is now wondering where the hell it is" [New Scientist].

belongs with that largest group of gray whales that lives in the eastern Pacific. They migrate from their calving waters off Baja California up the coast to the Arctic. But with the decreasing ice cover meaning that the the Northwest Passage is opening up, this lonesome traveler could've made it far enough east in those chilly Canadian waters that when it headed back south, it accidentally swam into the Atlantic Ocean. Then, seeking warm waters, it found them in the Mediterranean. While that seems like an incredible journey, whale expert Nicola Hodgins says that gray whales are well known for making some of the longest migrations in the world each year:

"Over a lifetime, a gray whale migrates the equivalent distance of a return trip to the moon. However, these new images show that this particular whale would have had to beat all previous distance records to end up where it has" [BBC News].

Still, Clapham says, the Northwest Passage journey is far more likely than the alternative explanation: That a relic population of Atlantic gray whales has escaped attention for centuries. The scientists don't have funding to tag and track the whale to be sure, but Clapham argues that this won't be the last whale to find its way across the Arctic to points unknown. Related Content: DISCOVER: Arctic Thaw

, on the opening Northwest Passage 80beats: Will Commercial Whale Hunts Soon Be Authorized?

80beats: Is the Whaling Ban Really the Best Way to Save the Whales?