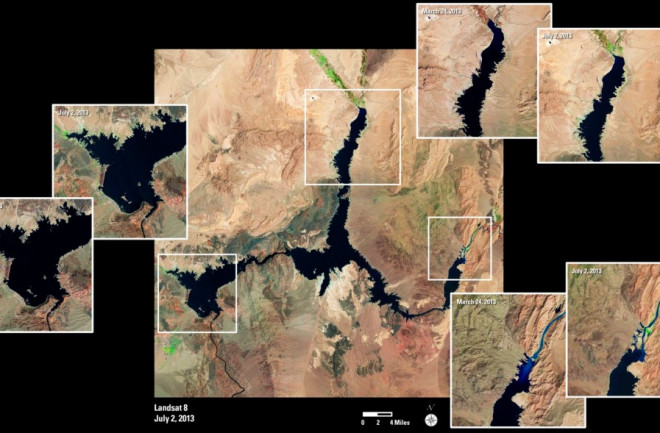 Imagery from Landsat 8 documents receding water levels in Lake Mead, a giant reservoir on the Colorado River, from March 24 to July 2, 2013. The (Image: USGS) The Colorado River is not exactly running on empty (in the immortal lyrics of Jackson Browne), but for the 40 million people who depend on its water, it is definitely running behind. Way behind. Last week, Arizona Sun reporter Eric Betz cranked through the latest Bureau of Reclamation numbers on water stored by reservoirs on the Colorado and found something that shouldn't be surprising — but is downright alarming nonetheless:

This year, the combined storage of Lakes Powell and Mead — and the total system storage of all 10 major reservoirs in the Colorado River Basin — is expected to reach its lowest point since Lake Powell was filled. Lakes Powell and Mead are projected to hit just 45 percent of their combined capacity this water year, according to the most recent 24-month Bureau of Reclamation study. Hydrologists define a water year as starting on Oct. 1 and ending Sept. 30.

In case you want to check his math, here's the data from the bureau's latest study. The satellite image up top, from Landsat-8, illustrates the story quite effectively, I think. It shows how much Lake Mead, the giant reservoir on the Colorado River created by Hoover Dam, has receded in just a little over three months. Lake Powell is the other massive hydrologic savings bank on the river. It receives water in large measure from runoff originating in the Rockies, including the Upper Colorado River Basin in Colorado, where I live. Based on how much water flows into Powell, the Bureau of Reclamation decides how much water to release downstream for Lake Mead. It's all part of an elaborate system of reservoirs designed to assure that those 40 million users in seven states get what they need to drink, water their crops, and run their industries and businesses. The problem is that those users are consuming more water than is running into the system. And the imbalance isn't just some short-term headache for citizens of Arizona, California, Colorado, New Mexico, Nevada, Utah and Wyoming. In recent testimony, bureau director Michael Connor gave Congress a stark lesson in paleoclimatology: Tree-ring studies indicate that over the past 14 years, Colorado River Basin flows have been among the lowest in the area in more than 1,200 years, he said. The past four months haven't changed that situation. From April through July of this year, natural natural inflows of water into Lake Powell are projected by the Bureau of Reclamation to be 2.67 million acre-feet — which is just 37 percent of average for that period. In his testimony before Congress, Connor said that by 2060, demand for Colorado water is likely to exceed supply by 3.2 million acre feet annually. Let's do the math...

To put that in perspective, the population of the city of Los Angeles is 3.8 million. Of course lots of factors could make the situation better or worse. For example, snowfall could pick up dramatically in the Rockies, and population growth could be slower than projected. But with climate change, which is expected to result in less, not more runoff into the Colorado system (8.5 percent less by 2050), I wouldn't bet on it. Something's gotta' give. We can't keep running blind.