WATCH: Tropical Cyclone Marcus marauding through the Indian Ocean, as seen in this beautiful satellite video

Marcus is the world's strongest storm so far in 2018

https://youtu.be/IdDqSRBJ0Hw After strengthening into the year's first Category 5 storm, Tropical Cyclone Marcus has weakened. At it strongest, the storm attained maximum sustained winds of 185 miles per hour as it swirled off the northwestern coast of Australia on Wednesday. As I'm writing this on Thursday (Friday morning in Australia), Marcus has settled down to 120 mph, according to the Australian Bureau of Meteorology. It is forecast to continue to weaken and pose no risk to land. The video above shows Marcus at its strongest, as seen by Japan's Himawari-8 satellite. The animation begins at 20:00 UTC on March 21, 2018 and runs through 14:00 UTC on March 22. The cyclone's maximum sustained winds during this period qualified it as a Category 5 storm on the Saffir-Simpson Hurricane Wind Scale. A portion of northwestern Australia is seen at the bottom right, and the Indonesian archipelago is visible in the upper right. Seeing Marcus both in daytime and nighttime is made possible by an imagery product called “GeoColor.” This allows an almost seamless transition between visible imagery acquired during the day and infrared imagery captured at night. 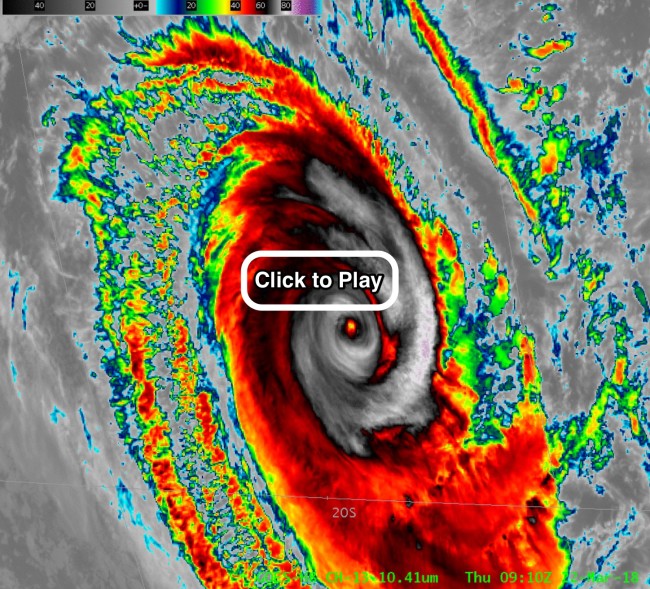 Another view of Tropical Cyclone Marcus. (Note: If you have trouble viewing this animated GIF in the Safari web browser, try Chrome. Source: CIMSS Satellite Blog) The infrared view above of Marcus also was acquired by Himawari-8. The video covers 09:00 through 15:40 UTC as the storm lumbered southward, weakening as it went. While Marcus is beginning to peter out, another storm has been strengthening and now poses a risk to Australia: Tropical Cyclone Nora. https://twitter.com/BOM_NT/status/976976442100736002 As I'm writing this Nora is a Category 2 storm undergoing rapid intensification. Located off the northeast coast of Australia's Northern Territory, it is moving slowly east. It is expected to reach Category 3 strength within the next 24 hours. Nora will move soon into the Gulf of Carpenteria, with landfall forecast along the western Cape York Peninsula on Saturday or Sunday.