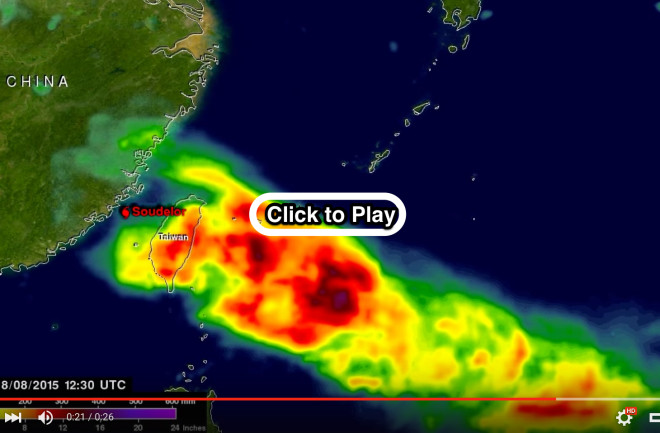 A screenshot from an animation showing showing estimated rainfall generated by Typhoon Soudelor between August 3-9, 2015. Rugged terrain helped wring extraordinary rainfall totals from the storm, with over 1,320 mm (52 inches) being reported in Taiwan. (Source: SSAI/NASA/JAXA, Hal Pierce) Super Typhoon Soudelor may be spinning off into memory now, but I nonetheless thought I'd share this extraordinary animation of the storm's accumulated rainfall as it charged toward, and then over, Taiwan between Aug. 3 and 9, 2015. It was released by NASA today. In the animation (please click the image to watch it), Soudelor enters the frame at lower right and churns toward the northwest, trailing a light show of glowing color indicative or rainfall amounts. The precipitation estimates are based on data from the Global Precipitation Measurement satellite mission, or GPM, supplemented with data from other satellites. To my eye, the animation indicates rainfall totals in parts of Taiwan of about 350 millimeters, or almost 14 inches. But we know from reports on the ground that more than that fell in some localities. One location in Datong Township, Yilan County, experienced more than 4 feet of rain, according to Mashable's Andrew Freedman. After you watch the following video, I'm sure you can believe it: https://twitter.com/westpacwx/status/629948989224419328 Taiwan's spine of mountains helped wring all that moisture from Soudelor, resulting in catastrophic floods and mudslides like this one. It was these effects, not the cyclone's winds per se, that caused most of the devastation from the storm. Twenty-two people are lost or missing in Taiwan and mainland China. Five of the deaths occurred in Taiwan. Soudelor formed in the Pacific Ocean east of Guam on July 20, 2015. It would go on to become the strongest tropical cyclone on planet Earth so far this year.

On Aug. 3, Soudelor reached peak intensity, still well east of Taiwan, with sustained winds of 178 mph. It roared ashore in Taiwan on Saturday, Aug. 8 with winds over 100 miles per hour. There's still quite a lot of time left in the northern Pacific's cyclone season. And with a powerful El Niño still gathering strength, Soudelor might be a taste of much more to come.