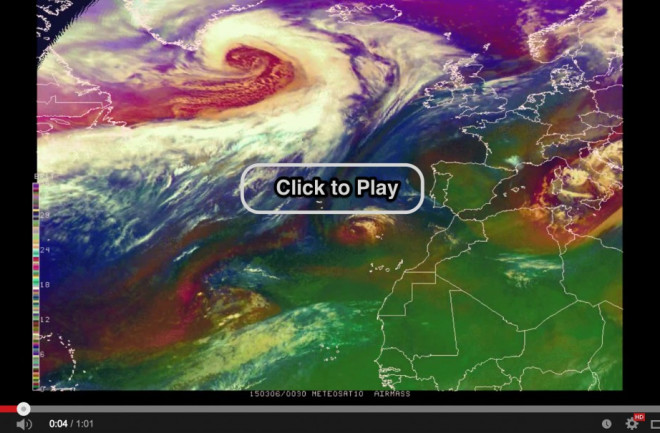 Screenshot of a video showing satellite views of the evolution of two large storms in the North Atlantic Ocean. (Source: National Weather Service) Back on Feb. 24th, I posted a video based on satellite data showing a low pressure system in the North Atlantic evolving into a hurricane-force storm. I guess when it rains it, uhm, pours... In the past few days, not one but TWO big storms with hurricane-strength winds have swirled in the North Atlantic. Click the image above to see a video of the storms just released by the Ocean Prediction Center of the National Weather Service. The data for the video come from the infrared and water vapor channels of the Meteosat Second Generation satellite, and the false color scheme used here is particularly good at showing the rapid evolution of cyclones. The video also shows what the weather service calls "pseudo-natural color imagery" produced by the Meteosat-10 satellite. The first storm spun up hurricane force winds on March 6th to the east of Greenland, while the second storm intensified to hurricane force just today as it passed north of Ireland. Sure enough, the Irish Meteorological Service has issued a warning for winds up to storm force — meaning 55 to 73 miles per hour — for parts of the coast.