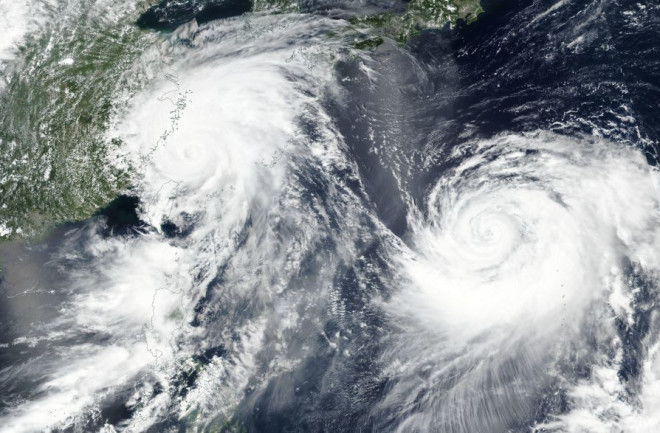 Typhoon Lekima blasted ashore south of the mega-city of Shanghai early on Saturday local time, whipping the coast with sustained winds of around 115 miles per hour.

A million people were evacuated ahead of the storm, which has caused 13 deaths. Now a tropical storm, Lekima is churning north through eastern China, raising risks for major flooding and mud slides.

The animation of Himawari-8 satellite imagery above shows Typhoon Lekima on Thursday, Aug. 8 as it was passing through the Ryukyu Islands of southern Japan. It documents dramatic behavior by the eye of the storm. So be sure to click on the screenshot, and then be a little patient if it takes a moment for the high-resolution animation to load.

At the start of the infrared view, Lekima whirls northwestward, looking all the world like a buzzsaw aimed at Ishigaki Island, home to one of Japan’s southernmost cities. At the time, it was very dangerous typhoon, with sustained winds equivalent to a Category 3 hurricane.

But then, at the very last moment, Lekima’s eye abruptly bobs and weaves, avoiding Ishigaki and threading the needle between the islands of Tarama and Irabu. The eye wall seems to brush Tarama, the tiny island to the left.

Meteorologists call this “trochoidal motion,” which is a fancy name for a particular kind of wobble that is not uncommon in cyclones undergoing an eyewall replacement cycle. The replacement happens when the wall of clouds and high winds surrounding a cyclone’s eye weakens. As this continues, a new wall develops around it, and then contracts, replacing the old eyewall.

A radar view of Typhoon Lekima as it approached southern Japan’s Ryukyu Islands. It was undergoing an eyewall replacement cycle, which caused the typhoon to wobble in a process called “trochoidal motion.”

At the point at which we see Lekima in the animation, the original eyewall was weakening, and an outer one was forming. As the typhoon continued to approach the Ryukyu Islands, the inner eye basically wobbled around inside the outer one, giving rise to that amazing bobbing and weaving motion.

Meanwhile, a thousand miles to the east, Typhoon Krosa is spinning through the Pacific, as seen in the Suomi NPP satellite image above. (Krosa is the cyclone to the right.)

I’d love to be able to say that the typhoons are doing a do-si-do — something that’s actually not unheard of. In 2017 for example, two tropical systems in the Northeast Pacific spun around each other in a kind of cyclonic do-si-do — and then the bigger one ate most of the smaller one.

But that’s not what’s happening here. Still, this is pretty cool to behold — two big, powerful typhoons in such proximity (relatively speaking).