Waste Spill from Colorado Mine Is Much Bigger Than First Believed 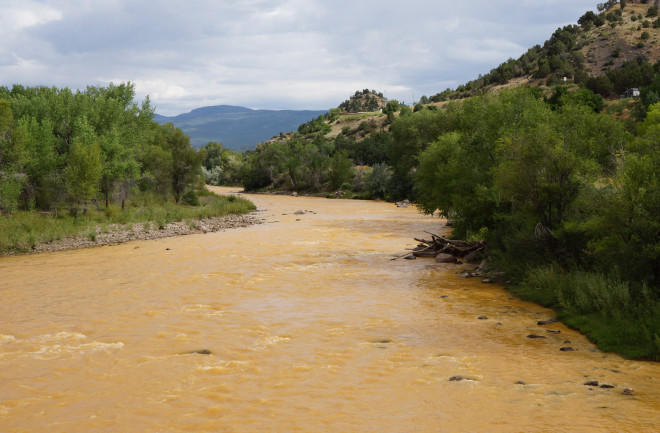 The Animas River the day after the spill from the Gold King Mine. (Credit: Barbara K Powers/Shutterstock)

The EPA, tasked with protecting human health and the environment, on Wednesday unleashed a torrent of toxic waste into Colorado’s Animas River while attempting to perform maintenance on an abandoned mine.

Initially, the agency estimated that 1 million gallons of water laced with heavy metals flowed into the river, but on Sunday that estimate rose to 3 million gallons – along with the fears of local residents who rely on the Animas for their livelihoods and clean drinking water.

The Gold King Mine near Silverton, Colorado, has been closed since the 1920s, but a dam holding back wastewater on the site was leaking. The EPA crews visited the mine to locate the leak in hopes of repairing it, but the earthen dam that held back the water crumbled when workers drilled into it. A deluge of water contaminated with arsenic, iron, zinc and other toxins burst through the dam, coloring a 100-mile portion of the Animas River bright orange.

The mine continues to discharge 500 gallons a minute, USA Today reports, but the sludge is now being held in containment ponds.

The EPA originally estimated that 1 million gallons of sludge flowed into the river, but inflated their estimate to 3 million gallons after the agency used a stream gauge from the U.S. Geological Survey. La Plata County and the City of Durango have already declared their own states of emergency, as an estimated 1,000 private wells are thought to be contaminated. Colorado Gov. John Hickenlooper is also preparing to declare a state of emergency for those areas.

The EPA has not said how long it will take to clean the mess up, and it is still analyzing water samples near Durango to assess the safety of the water. However, an EPA toxicologist told CBS News that the sludge moved so quickly after the spill that it would not have “caused significant health effects” to animals that consumed the water. Still, residents near the spill, and downstream, are concerned. For now, local officials have closed the river to the public.

The EPA is sending officials to areas near the spill and downstream to test water quality and provide the necessary materials to people in other areas to test their private wells. County officials are urging residents to have their water tested before consuming it. Officials are also instructing people to not catch fish and avoid contact with wildlife along river.

The EPA has placed cages of fish in the river to see how they react to the waters, and are working with health officials to determine risk to the exposed communities.