Was Earth Headed for the Mother of All Ice Ages Before Global Warming? 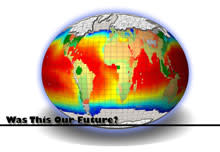 Before we humans came along with our Industrial Revolution and our greenhouse gases, the earth was hurtling towards an intense ice age that could have covered much of the northern hemisphere with deep ice sheets as soon as 10,000 years from now, according to a tentative new study. But that's no reason to thank our lucky stars for global warming, says study coauthor Thomas Crowley:

"We're creating a situation at least as dangerous, only going in the opposite direction" [Wired News].

Climate data shows that complex life evolved on a much warmer "hothouse earth," and that the planet has been gradually cooling for the last 50 million years.

Then, 2.5 million years ago, the climate entered a curious new phase: it started oscillating wildly, see-sawing between interglacial periods with conditions similar to today's and ice ages during which the amount of permanent ice in the northern hemisphere expanded hugely. At the peaks of these transient ice ages, much of northern Europe, northern Asia and North America were covered in ice sheets [more than 2 miles] thick, and sea levels were [almost 400 feet] lower than today [New Scientist].

The new study argues that this period of oscillations was a transition to a stable, long-term ice age that would have made those previous ice ages look like mere cold snaps. But Crowley says his findings deal with how the earth's climate would have shifted naturally, without the influence of humankind, and says that man-made increases in greenhouse gases in the atmosphere will likely throw all his projections out the window. Present carbon dioxide levels are probably sufficient to prevent his predicted ice sheets from ever rolling over Europe and Asia, Crowley says. The study, published in Nature [subscription required], relies heavily on computer projections, and still needs corroboration:

"It's not proven but it's more than just an interesting idea," says Crowley [New Scientist].

But other paleoclimatologists expressed skepticism about the results.

Prehistoric-climate expert Lorraine Lisiecki said, "This is the only study of which I am aware that suggests the next ice age could be much more extreme than those of the previous one million years." ... But she agreed that we might never find out what would have happened naturally, due to human-caused global warming [National Geographic News].