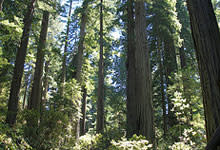 Forest scientists have come to a surprising conclusion regarding old growth forests and their majestic, mature trees: They're not just relaxing in their arboreal old age, but are still actively taking in carbon dioxide from the atmosphere. The new study suggests that protecting old growth forests may be just as important as planting new trees in efforts to reduce carbon dioxide levels and fight global warming. Previously, researchers believed that only young, fast-growing trees absorbed enough carbon dioxide to be considered significant "carbon sinks." Old, crowded forests don't allow for much new growth:

The only new growth occurred in the small spaces that opened up when large old trees died and decomposed, releasing their accumulated carbon. The forests at large were therefore considered to be carbon neutral, and accounted as such in climate models [Nature News].

But the new study shows that the slow but continuous growth of old trees means that they continue to suck up more carbon than they release. For the study, published in the journal Nature [subscription required], researchers examined over 500 studies of forests around the world.

They calculated that primary forests in Canada, Russia and Alaska alone absorb about 1.3 gigatonnes of carbon per year, about ten percent of the net global carbon exchange between the ecosystem and the atmosphere. These forests need to be protected not just because they help to absorb carbon dioxide, but also because destroying them could release huge stores of greenhouse gases. "Old-growth forests accumulate carbon for centuries and contain large quantities of it," [lead researcher Sebastiaan] Luyssaert said. If these pools of CO2 "are disturbed, much of this CO2 will move back into the atmosphere," he added [AFP].

The new findings suggest that old forests should be included in any policies intended to mitigate global warming. Study co-author Beverly Law says

that the findings argue for including credits for preserving old growth forests in the Kyoto Protocol and cap-and-trade schemes for controlling greenhouse gas emissions blamed for global warming [AP].