The first plug-in electric American car, the Chevy Volt, is going on the market in 2010. It doesn't look like the phallus some gearheads want it to look like (they were into the old car-show model, shown here), and this is causing lamentation in the blogosphere. Pay no attention; this is very good news. 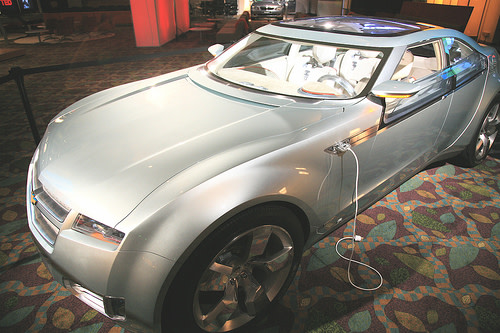 Basically, the Volt can go 40 miles without using any gasoline, and plugs into any old home socket. It takes a few hours to recharge. Only when you're taking long trips do you need to use gas; the gas motor kicks in after 40 miles and takes you another 300. It uses less electricity a year than a fridge. The only problem: It's not really viable as a mass-market business proposition yet. It'll probably cost about $40,000, and GM doesn't expect to make a significant profit, even with that hefty price. So while in my wildest dreams it becomes illegal to make any other kind of family car in 2011, that's not going to happen without destroying the American economy. Image: flickr/jurvetson