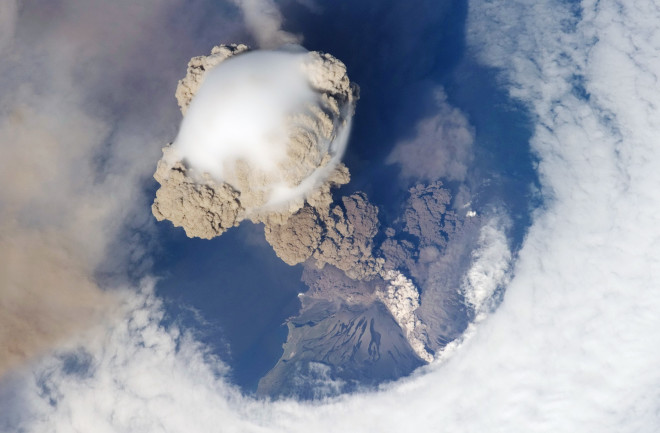 An astronaut aboard the International Space Station captured this dramatic photograph of Sarychev Volcano in an early stage of eruption on June 12, 2009. The volcano is in the Kuril Islands, northeast of Japan. (Photo: NASA Earth Observatory) If you pay attention to global warming skeptics, you've probably heard the oft-repeated meme: global warming has stopped. It's not really true, of course. (More on that in a minute.) But there is evidence that over the past 10 or so years, the underlying rate of warming has slowed. What gives? One hypothesis has pointed to a 60 percent upswing in sulfur dioxide air pollution from coal burning in China and India. Sulfur dioxide aerosols act like a parasol to reflect some of the sun's energy back into space, and thereby cause cooling. But new research published today shows that sulfur dioxide aerosols spewed into the stratosphere by moderate volcanic eruptions have been a significant reason why warming has slowed. The research was led by Ryan Neely at the Cooperative Institute for Research in Environmental Sciences, and it has been published online in Geophysical Research Letters. (Disclosure: The University of Colorado, where I work as co-director of the Center for Environmental Journalism, is a partner in CIRES.) Previous research has suggested that increasing shading from aerosols in the stratosphere has offset about 25 percent of the warming caused by human emissions of carbon dioxide and other greenhouse gases. To determine the roles played by pollution from coal burning and volcanic eruptions, Neely and his colleagues used computer modeling. And as part of the work, they included data on volcanic eruptions between 2000 and 2010 — including Sarychev Volcano in the Kuril Islands, which blew its top on June 12, 2009. That's the one in the picture at the top of this post, shot by an astronaut aboard the International Space Station. (For a short but incredible video, click here.) Neely says the 2000 to 2010 period has been unique "because it was the first full decade or longer that we had extensive observations of the aerosol layer that were not perturbed by a large eruption" — one like the gargantuan Pinatubo eruption in 1991. "In light of this, we were able to study the 'background' state of the straotosphere aerosol layer for the first time and start to understand how smaller volcanic perturbations, and humans, may be impacting it. What we found was that, over this decade, moderate volcanoes drove the variability." What about the claim that global warming has stopped, or that the planet has even been cooling? Not true says Neely:

Climate change has not stopped. We are still emitting massive amounts of greenhouse gases, and that increase will cause the temperature to rise. This has been known since the late 1800s and is pretty basic science.

More to the point, Neely says climate trends need to be evaluated over a period of time long than just ten or 15 years:

Due to the intrinsic variability of the atmosphere, one cannot draw any conclusions over such short periods. What we have shown is that moderate volcanoes (smaller than previously thought were important) play a role in this variability by slowing the warming that we would have expected to see if the only thing changing was the amount of greenhouse gases.

But volcanoes aren't the whole story:

Other forcings have also helped to slow the rate of warming over this period, and if you add them up they help explain the decadal variability we are seeing. Because regional and short-term scales are the ones that have impacts on our lives, we need to understand all the players in the details of the variability better so that we may make better predictions of climate change on these scales. This study had contributed to this understanding.