Gargantuan atmospheric rivers of moisture along with a series of storms have provided desperately needed relief. 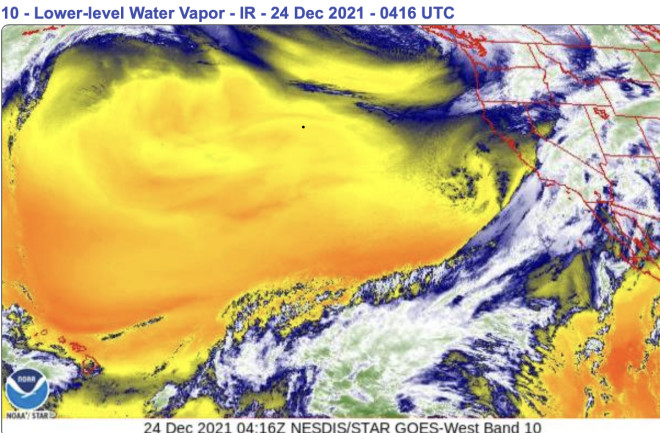 The GOES-West weather satellite captured this infrared image of a river of water vapor surging through the middle and lower levels of the atmosphere over the Pacific Ocean toward the west coast of North America on Dec. 24, 2021. See below for an animation of this vast atmospheric river. (Credit: NOAA)

At least for now, California and other parts of the western United States have gone from famine to feast.

We're talking about precipitation, of course.

Since before Christmas, large portions of the Golden State have gotten hosed by atmospheric rivers of moisture and a series of potent storms. This has brought copious snowfall to the Sierra Nevada range all the way east to Colorado.

In California, statewide snowpack has gone from just 18 percent of normal on December 1 to a whopping 159 percent for December 28. And that reversal of fortune has been shared througout most of the West, as this dramatic animation shows:

On Dec. 1, 2021, nearly the entire West was suffering from a dramatic dearth of moisture, as indicated by the yellow, orange and red colors. Since then, atmospheric river events and a parade of storms have mostly turned things around, with green and blue colors on Dec. 27, 2021 indicative of normal to above-normal snowpack. (Credit: Maps from Natural Resources Conservation Service. Animation by Tom Yulsman)

You may have heard that we're currently in the grips of La Niña, a climatic phenomenon that typically tilts the odds toward wetter than normal conditions in the Pacific Northwest but also toward abnormal dryness across southern California and the Southwest. Clearly, something else is going on — and I'll post a story soon that looks in depth at just what that might be.

For now, what follows is a selection of dramatic satellite imagery documenting just how much things have changed in a few short weeks:

A vast river of water vapor in the middle to lower levels of the atmosphere surged toward the west coast of North America on Dec. 24, 2021, as seen in the animation above consisting of infrared images acquired by the GOES-West satellite. This atmospheric river dumped copious precipitation on drought-plagued California, including much need snow in the Sierra Nevada . The largest atmospheric rivers move an amount of water vapor roughly equivalent to 7.5 to 15 times the average flow of the Mississippi River at its mouth, according to the National Oceanic and Atmospheric Administration.

This view of the atmospheric river that has drenched California and other parts of the west coast of North America was acquired by the Suomi NPP satellite on Dec. 23, 2021. (Credit: NASA Worldview)

The image above, acquired in natural color by the Suomi NPP satellite, shows clouds associated with the same atmospheric river stretching all the way to the Rockies in Colorado.

Images acquired by NASA's Terra satellite nearly a month apart show just how much the snowpack has swelled in the southern portion of California's Sierra Nevada range. (Credit: Images via NASA's Worldview. Animation by Tom Yulsman)

From 512 miles high in orbit, the lack of snowpack prior to Christmas in California's Sierra Nevada range was painfully evident to NASA's Terra satellite, which captured the first of the two images in the animation above on Dec. 1, 2021. Only the highest peaks had any snow cover. By Dec. 27, however, the snowpack had expanded dramatically, as seen in the second image, captured on Dec. 27.

On Dec. 2, 2021, the snowpack in the Colorado Rockies was suffering badly, as seen in the first image of this animation, acquired by NASA's Terra satellite. By Dec. 27, a blanket of white was covering most of the high country. (Credit: Images via NASA's Worldview. Animation by Tom Yulsman)

In Colorado, snow season was ushered in by extraordinarily dry and warm conditions. In fact, summer through the end of November was the warmest such period on record in the state, according to the Colorado Climate Center. And November, when snow season should have been gearing up, was the 11th driest. But as the animation of satellite images above shows, the situation has improved dramatically as we've headed toward the new year.

All this moisture couldn't have come too soon for the West. But the region could easily go from the current feast back to the famine it was experiencing just a few weeks ago.

And whatever the next couple of months bring, continued warming will pose ongoing challenges. Research shows that global warming has pushed the southwestern portion of North America into a multi-decadal megadrought worse than any since the 1500s. As the climate warms further, aridification of this sprawling region is likely to worsen.