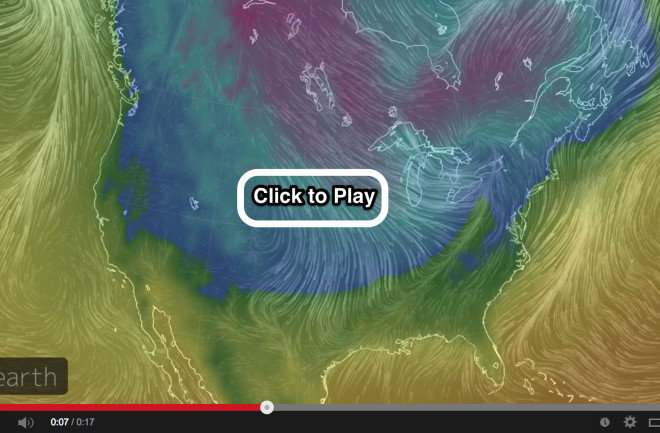 Screenshot from an animation depicting the blast of Arctic air rushing south across much of the U.S. (Images: earth.nullschool.net. Animation: Tom Yulsman) By now you've probably heard enough about the polar vortex to make your head, well, spin. So as the Southeastern United States is being pummeled by a rare winter storm, I thought I'd try to come up with a visualization of the current Arctic blast that's a bit different from what you may have seen already. Click on the image above to watch what I've put together. It's an animation based on visualizations from earth.nullschool.net depicting both the wind field and temperatures over the United States from early in the morning this past Sunday (Jan. 26) through this morning. The moving lines correspond to the winds, and the colors to temperature (with blues, greens, and purples indicating areas that are colder). I am particularly struck by the pattern of winds at about six seconds into the animation. The cold air rushing from northwest to southeast really does look like a blast from a shotgun. To make the animation I took individual screenshots of the wind field and temperature in three hour increments — 18 separate screenshots in all. Then I compiled them into a GIF animation, which I uploaded as a movie to Youtube. (I should also tip my hat to Andrew Freedman, whose post at Climate Central got me going on this idea.)

The visualization is actually based on forecasts by supercomputers, not observations. But it does seem to be in accord with observed temperatures, which you can see by clicking on the thumbnail at right. This latest Arctic blast, as with ones previously (including this one) comes as the jet stream has developed a huge, southward kink. This in turn has allowed frigid air from the high north to rush south.

A map of the jet stream on Jan. 26, as seen in a polar projection. (Source: California Regional Weather Server/San Francisco State University) The map above shows the position of the jet stream on Jan. 26. You're looking straight down onto the North Pole. North America is in the lower right quadrant. Notice the large southward dip over Canada and into the Upper Midwest of the United States. This has since plunged further south, bringing cold air with it. Also note the upward kink that takes in Alaska. This has resulted in extreme warmth there, with at least seven record high temperatures for January experienced in recent days. For example, Nome reached 51°F (10.6°C) yesterday, beating the former record of 46°F (7.8°C) set on January 7, 1942. Here's a map of the overall pattern in the Northern Hemisphere:

A map of geopotential height anomalies in the Northern Hemisphere. Blues and purples correspond to colder temperatures. Warmer colors to higher temperatures. (Source: NOAA Earth System Research Laboratory) Technically speaking, this map shows a forecast from today for something called geopotential height anomalies. For a good explanation, go here. Suffice it to say that geopotential height is the elevation of an air pressure surface above sea level. Since cold air is relatively dense, pressure surfaces in cold air masses tend to be lower than in warm air masses. And that means geopotential heights in cold areas are lower. In the map of height anomalies above, the colors show departures from average, with blues and purples showing lower than normal heights and therefore colder than average temperatures. It's a little difficult to discern the outlines of continents, individual nations, and U.S. states in the map. But Mexico and Florida are pretty clearly visible at the bottom toward the middle. Follow them up north into the rest of North America, and you should be able to orient yourself. As the map shows, unusually warm air is parked over Alaska and much of the Arctic, displacing a lobe of particularly frigid air over the United States. (The lobe visible over the United Kingdom is indicative of low pressure there that's bringing stormy and colder than average conditions there.) This is what you get when the polar vortex weakens — something which could be linked to climate change, although the scientific jury is still out on that.

A farmhouse and bare cottonwood trees in Niwot, CO, just as the Arctic blast was moving through. (Photograph: © Tom Yulsman) Lastly, I'm sure many of us have stories to tell about when the cold front moved through. I was out for a walk with my wife, and my best friend (Moe, our Labradoodle). I checked the temperature just as I was leaving: 62 degrees F. The sun was so bright it almost hurt. (Granted, I hadn't seen it for two weeks, having just gotten back from a trip above the Arctic Circle in Norway.) But to the north and east, clouds were gathering quickly. And about a mile into our walk, the Arctic blast hit us. Winds were gusting to about 25 miles per hour, and literally within seconds the temperature had plunged by 15 degrees. About two hours later, it began to snow. If you look at the animation at the top of this post, you can see that front moving down through the West and spreading south. My friends are blaming me for bringing the Arctic air back with me from Norway. But I think it's the polar vortex. (There. I said it.)