This animation shows how sea surface temperatures have departed from the long-term average, from August through early October 2018. (Animation by climate.gov; data from NOAA’s Environmental Visualization Lab.) It's still not here yet, but El Niño sure looks like it's coming. In its latest forecast, NOAA's Climate Prediction Center says there is a 70 to 75 percent chance that El Niño will form "in the next couple of months and continue through the Northern Hemisphere winter 2018-19." If the forecast turns out to be correct, the El Niño could influence weather around the world. El Niño is typically associated with an extended Pacific jet stream and amplified storm track, boosting the odds of wetter than average conditions across the southern tier of U.S. states. Should things play out this way (and they may not!), it could bring at least some relief for parts of the drought-stricken Southwest. One of the factors behind the Climate Prediction Center's increasing confidence that El Niño is coming can be seen in the visualization above. It shows how sea surface temperatures have evolved each week from August through early October — specifically, how those temperatures have differed from the 1985-2012 average. Pay particular attention to the equator off the coast of South America and extending west to the middle of the Pacific. See the blue tending to give way to red? This is indicative of warming surface waters. As Emily Becker, a NOAA research scientist, puts it in a post at the ENSO Blog:

Over the past several weeks, surface temperature anomalies (difference from the long-term average) have gradually increased across much of the tropical Pacific. All four of the Niño-monitoring-region temperatures are now above average.

So we're getting there. But we're not there yet.

This visualization of a cross section of the equatorial Pacific shows how the temperature of subsurface waters has differed from the long-term average between August and early October. Depth is indicated on the vertical axis, and longitude on the horizontal one. (Source: NOAA Climate Prediction Center) Other signs point toward El Niño's arrival as well, according to Becker. The trade winds that normally blow from east to west (from South America toward Indonesia) have weakened significantly in the central and eastern parts of the equatorial Pacific. The slackening in the winds, in turn, has helped a blob of warm subsurface water — see the animation above — to migrate eastward and rise toward the surface. This is helping to reinforce the warming of equatorial Pacific surface waters. 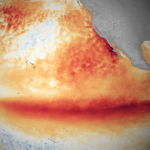 Sea surface temperature anomalies during 2015 El Niño. (Source: NOAA) Right now, the models are forecasting a relatively weak El Niño. (Click on the thumbnail at right to see what sea surface temperatures look like during a strong El Niño.) But that doesn't exclude significant weather impacts, including extra moisture in drought-plagued areas. As Becker puts it, "The strength of El Niño doesn’t necessarily indicate the strength of its impacts on global weather. But a stronger El Niño can increase the likelihood that impacts of some kind will happen." If current forecasts are right, we won't have to wait too much longer to find out just what El Niño will bring this time around.