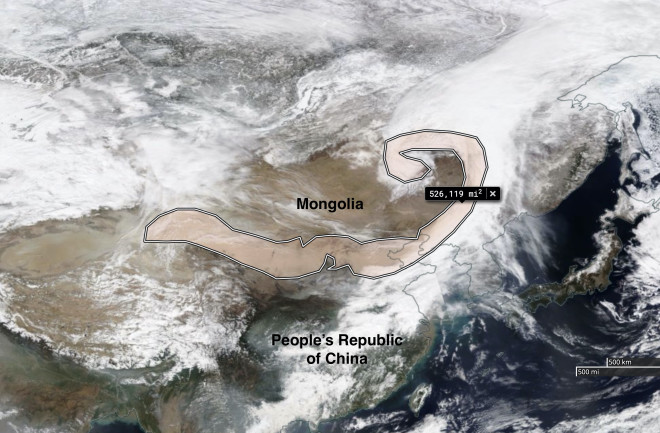 The worst sandstorm in a decade blanketed more than a half million square miles of China on March 15, 2021, as seen in this annotated image acquired by the Suomi NPP satellite. (Credit: NASA Worldview)

China's worst dust storm in a decade looked bad enough from the ground in Beijing, where earlier this week it turned the sky a ghastly shade of orange and triggered an air quality crisis.

But only from the perspective of space is it possible to fully appreciate the enormous scale of the sprawling blanket of dust.

You can get a sense of that in the image above, acquired by the Suomi NPP satellite on March 15, 2021. The image shows a huge, scythe-shaped weather system entraining the dust and spreading it across China and Mongolia. I've outlined the part of the dust storm that was visible to the satellite's sensors and calculated that it smothers an area of more than half a million square miles.

Here's another view that puts the dust storm in an even broader perspective:

The view from space of the massive Asian dust storm on March 15, 2021. (Credit: RAMMB/CIRA/Slider)

The animation, which consists of imagery acquired by Japan's Himawari 8 satellite on March 15, cycles between a natural color view and one with an overlay in yellow showing where the satellite detected dust. (For a full-sized verson of the natural-color view, go here.)

NASA scientists have traced the dust's origins to the Taklamakan Desert, a cold desert in the rain shadow of the Himalayan Range in northwestern China. But choking dust was also initially reported in Mongolia, where it left at least six people dead, the country's Emergency Management Office said.

As the dust storm coalesced and was picked up by the giant weather system, it ultimately spread across 12 provinces of northern China. When the dust swept into Beijing, the city saw skyrocketing airborne concentrations of PM 2.5, microscopic particulate matter that can lodge deep in the lungs and cause multiple health problems.

The dust added insult to injury: Beijing had already been suffering through an extended period of poor air quality.

"Beijing is what an ecological crisis looks like," said Li Shuo, the policy director for Greenpeace China, in a Tweet. "After two weeks of smog and static air, strong wind carries a sand storm in, sending AQI off the chart. It’s hard to claim we are moving forward when you can’t see what’s in front."

To be fair, in recent years China has actually made progress in reducing air pollution in the capital city. And a massive tree-planting campaign aimed at stabilizing degraded soils has reportedly lessened the frequency of springtime dust storms.

Even so, the recent smog and this week's choking dust have revived memories of dreaded "airpocalypse" episodes.

Dust storms are not uncommon in this part of Asia in springtime. But this one arose earlier — and expanded much faster — than usual, according to NASA.