Vegas, Baby! Should Taxpayers Bail Her Out of Water Woes? 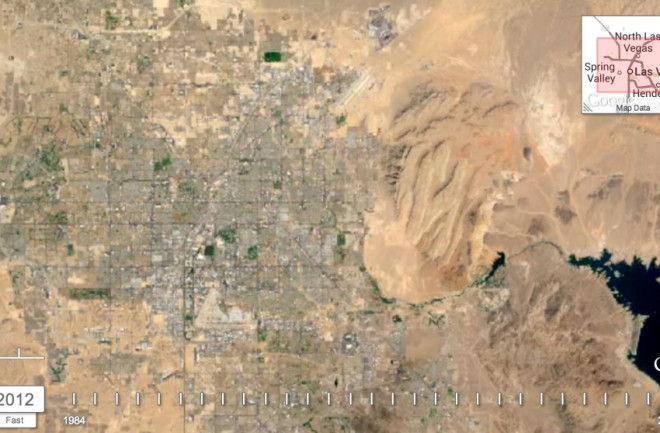 The image above is a screenshot from an animation of Landsat images showing the massive growth of Las Vegas between 1984 and 2012, as well as the dramatic shrinking of Lake Mead (to the right), from which the city draws 90 percent of its water. (Click on the image to watch the animation.) To keep the water flowing, southern Nevada’s water czar has suggested that the region get federal disaster relief. (Source: Google Earth Engine) The U.S. Bureau of Reclamation made an historic announcement today: It is cutting its water releases from Lake Powell to their lowest levels since the giant reservoir on the Colorado River began to fill in the 1960s. Thanks to increasing demand for Colorado River water, and decreasing supply resulting from profound drought, Lake Powell has dropped to less than half full. To help slow the decline, the Bureau of Reclamation will reduce the amount of water Lake Powell releases downstream toward Lake Mead in 2014 by almost 1 million acre-feet. (An acre-foot is roughly the amount of water a U.S. household uses in a year.) But that means Lake Mead, the other giant hydrological savings bank on the river — and the supplier of 90 percent of the water used by Las Vegas — could be headed for even more serious trouble in coming years. That prospect has prompted the water czar for southern Nevada to float the idea of asking for federal disaster assistance to cope with dwindling water supplies. Quoted in the Las Vegas Review-Journal, Pat Mulroy, head of the Southern Nevada Water Authority, compared the drought and its effects to Hurricane Sandy, which inundated large parts of the Northeast in fall of 2012:

This is as much an extreme weather event as Sandy was on the East Coast. Does a drought not rise to the same level as a storm? The potential damage is just as bad."

Vegas draws its water from Lake Mead through two intake pipes. If the reservoir keeps dropping, one of those intakes could stop working as early as spring of 2015, according to the Review-Journal story. The water authority is racing to build a third intake pipe, and is considering other options as well, including a controversial plan to to pump 41 billion gallons of water a year to Vegas from rural Nevada. Estimated cost of that latter option alone: $7 billion, plus $8 billion in financing. Mulroy hasn't formally asked for a disaster declaration. But she made headlines last week when she argued that U.S. taxpayers should help pay the costs facing the residents of southern Nevada as they grapple with the costs of dealing with the ongoing drought. If a picture really does say a thousand words, then the animation of Landsat images at the top of this post (generated by Google's incredible Earth Engine) would say everything you need to know about how Vegas got into its current trouble. (Click on the screenshot to view the actual animation.) Reality, however, is much more complex than the animation alone would suggest. It shows the growth of Las Vegas between 1984 and 2012. To the right of the city is Lake Mead. As the city sprawls, the lake shrinks. The implication, of course, is that Vegas is to blame for what's happening to Lake Mead. But actually there are many millions of users of Lake Mead's water who don't live in Vegas. That point was made today by J.C. Davis, spokesman for the Southern Nevada Water Authority, in a Review-Journal story:

Nevada gets 300,000 acre-feet, or about 2 percent, of the 16.5 million acre-feet of Colorado River water that is parcelled out each year among seven western states and Mexico. If the Las Vegas Valley went a whole year without using any water from Lake Mead, the impact on the reservoir would be a rise of about three feet, Davis said.

Just so that reference to a three-foot rise makes sense, consider that Lake Mead has dropped 100 feet since the drought began more than a decade ago. Also consider that Vegas has actually reduced its use of Colorado River water by some 30 percent in the last decade, even as it has grown. So while the sprawling city and its ridiculous golf courses, fountains, and still-excessive use of water overall certainly have played a role in drawing down Lake Mead, much, much more is obviously going on. Drought is a huge part of the picture. As Bureau of Reclamation director Michael Connor told Congress recently, over the past 14 years, Colorado River Basin flows have been among the lowest in the area in more than 1,200 years.

The famous Pogo Earth Day 1971 poster. (Source: Wikipedia.) As this famous poster from Earth Day in 1971 put it... (Click on it to see.) The bottom line is that consumption by the 40 million people who rely on Colorado River Water for drinking, farming, and industry — and that includes me — has been outstripping demand for years now. And the animation at the top of this post is symbolic of that stark reality. We're all Las Vegas, baby. So, does that mean we should all pitch in and help Vegas out of its own particular problem — a drinking straw that may soon fail to reach the giant cup the city depends on? Of course, Vegas would be no more than a dusty cow town, if that, were it not for the federal largesse that led to the construction of both Hoover Dam, which impounds Lake Mead, and Glen Canyon dam, which created Lake Powell. So one could argue that since U.S. taxpayers helped create the city — and so many of the big cities of the West — they have a responsibility to help pull its irons from the fire now that profound drought has left the city at the precipice of crisis. But one could also argue that even though Vegas has cut its use of Colorado River water, it has not done nearly enough. In an editorial last year, the Las Vegas Sun agreed:

Further efficiency and conservation efforts would improve Las Vegas’ access to a safe and reliable water supply, and reduce the need for huge capital projects and enormous increases in the utility bills of businesses and residents. Instead of embarking on the financially risky and uncertain route of increasing supply, heedless of impacts to Las Vegas’ economy, the SNWA should double-down on reducing consumption.

What do you think? Share your opinion below. And please, be civil.