U.S. Wildfires: Glow is Bright Enough to be Seen From Space 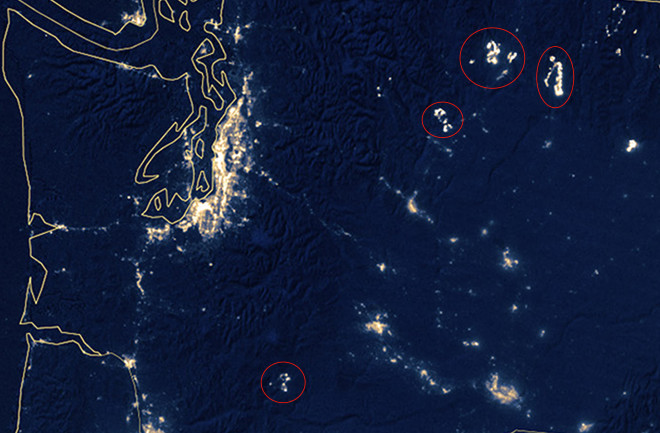 A nighttime image of most of Washington state acquired on August 19 by the Visible Infrared Imaging Radiometer Suite (VIIRS) sensor on the Suomi NPP satellite. Wildfires are circled in red. (Cropped and annotated version of an image from NASA's Earth Observatory.) Wildfires are burning hot and bright across portions of the Western United States — so much so that their glow is visible from space. The image above was captured by the VIIRS instrument on the Suomi NPP satellite early in the morning of Aug. 19, 2015. The lights of the city of Seattle glow brightly toward the left side of the image. To the south, in the lower left corner of the frame, is Portland Oregon. Just as bright is the glow from four raging wildfire complexes, which I've circled in red.

SEE ALSO: Wildfire Smoke Drifts Across 1,000 Miles of the West

To get yourself oriented, have a look at this animation of day and nighttime images (which also afford a broader view):

An animation of day and nighttime satellites images shows wildfires blazing in the Pacific Northwest. (Images: NASA Earth Observatory. Animation: Tom Yulsman) As I'm writing this, 73 active large fires are burning on 1,508,954 in 10 states. That's up 161,622 acres since yesterday's report from the National Interagency Fire Center. The increase in burning acreage is equivalent to half the size of Los Angeles. It happened in just one day. Most of the fires are blazing in Washington, Idaho, Montana, Oregon and California. For more on the fires, including imagery, head over to NASA's ever-awesome Earth Observatory.