The second warmest December on record boosted 2014 to the 34th warmest year in the contiguous United States, according to a report released today by the U.S. National Climatic Data Center. The record extends back to 1895. This marks the 18th consecutive year that the U.S. temperature exceeded the 20th century average. But it certainly wasn't close to being a record breaker in the United States (although it almost certainly will turn out that way globally for the year). The map above — and maybe your own experience if you live in the nation's midsection — shows why. When it comes to temperature, the orange and red colors, and the blue ones on the other hand, tell a tale of two regions. The West was exceedingly warm, with California, Arizona, and parts of Nevada and Oregon experiencing record warmth. A good portion of the rest of the region was much above average. Meanwhile, a swath of territory stretching from the Great Lakes in the north all the way down to Louisiana was much below average. And now, of course, 2015 has begun with a remarkably similar pattern. Warmth in the West and chill in the U.S. midsection have been intimately related, thanks to a wavy jet stream. A sharp upward bend in the jet allowed a high pressure ridge to build and persist for long periods over the easternmost Pacific into Alaska. And a downward bend farther east allowed numerous outbreaks of Arctic air — including the current one — to spill south into the U.S. midsection. 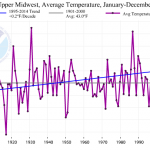 Yet despite the cold in the U.S. midsection this year, over the long run the region has been warming, as the graph to the right illustrates. (Click to enlarge.) And this points to something we shouldn't forget as pundits and activists use the weather and the latest climate reports for their own ends: The ups and downs in temperature in this and that region over the course of a year do not constitute climate change. If you want to know how the climate is changing you have to look at a decadal time scale. Here's what that looks like: 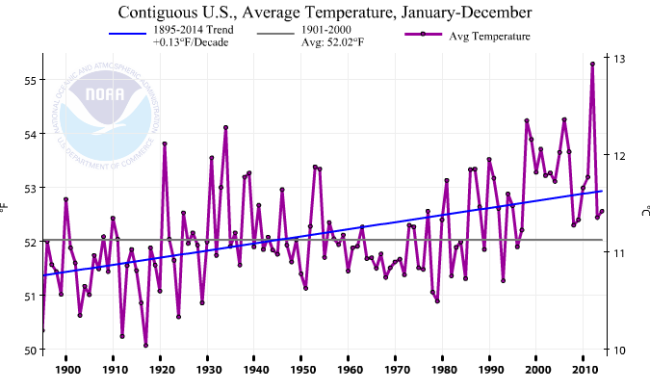 The long-term trend is pretty clear. Of course, so far we've only been talking about temperature. The year just past also featured eight weather and climate disasters in the United States that caused losses exceeding $1 billion, and led to the deaths of 53 people, according to the National Climatic Data Center. Also from the report:

The U.S. Climate Extremes Index (USCEI) for 2014 was 35 percent above average, ranking as the 19^th highest annual USCEI in the 105-year record. The components of the USCEI that were much above average for the year included warm nighttime temperatures and 1-day precipitation totals. The USCEI is an index that tracks extremes (falling in the upper or lower 10 percent of the record) in temperature, precipitation, drought, and land-falling tropical cyclones across the contiguous U.S.

Both the National Climatic Data Center and NASA will be coming out with global data for 2014 soon. It is widely expected that they will find 2014 to have been the warmest on record. The Japan Meteorological Agency already has.