Up Close With a Calving Antarctic Iceberg 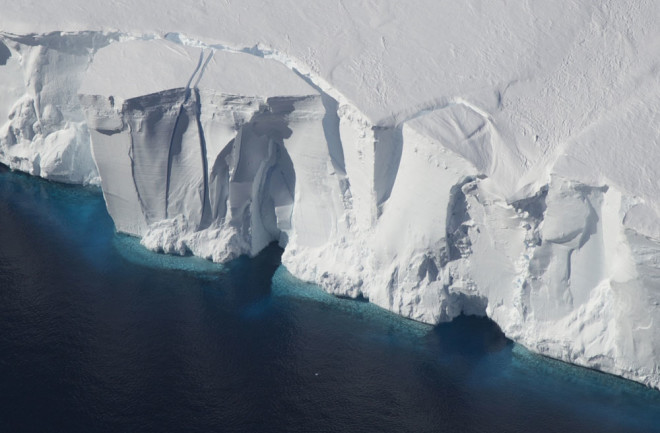 NASA Goddard sea ice scientist Jeremy Harbeck shot this image of an iceberg calving from the Getz Ice Shelf during a recent Operation IceBridge flight. (Credit: Jeremy Harbeck/NASA) Last year, an iceberg the size of Manhattan calved off the vast Getz Ice Shelf in West Antarctica and pushed off into the ocean. The shoreline cliffs of this frosty new island, dubbed Iceberg B-34, would rise hundreds of feet above the surface, and stretch some 1,000 feet below the Amundsen Sea. And yet, this sensational event pales in comparison to the persistent melt here. An ice shelf forms where inland glaciers meet the ocean. Here, sheets of ice slowly slide off land, where they permanently float atop the sea. At land’s edge, these shelves can be more than half a mile thick. These features are critical brakes on melting land ice because they slow its journey to the sea. And Getz is enormous. The flat expanse of this ice shelf stretches hundreds of miles long and dozens of miles wide. But as warm ocean water washes up beneath the ice shelf’s base, it’s rapidly melting it from below, which causes more icebergs to calve off the edges.

For the past several weeks, NASA’s been flying its DC-8 airborne laboratory over Antarctica. I embedded with them to get a closer look at the ice and their operation. And flying over the Amundsen Sea Embayment last week, it was easy to spot calving icebergs where the land ice meets the ocean. But farther inland, there are fewer obvious signs of rapid change. Even from 1,500 feet over the ice, Getz appears to extend forever with little change in its flat topography. But here and there, crisscrossing sections of crevasses appear, looking like the tops of freshly baked peanut butter cookies. Zoom out though, and space imagery shows

over recent decades. Scientists have watched some of those channels grow by more than 12 miles. The IceBridge missions provide critical ground truths for studies of glaciers and sea ice. The team flies Getz every year, and without that data, scientists wouldn’t be able to deduce the thickness of the ice or get a detailed picture of how Antarctic ice is changing. Discover associate editor Eric Betz joined the Operation IceBridge team at their base in Punta Arenas, Chile.