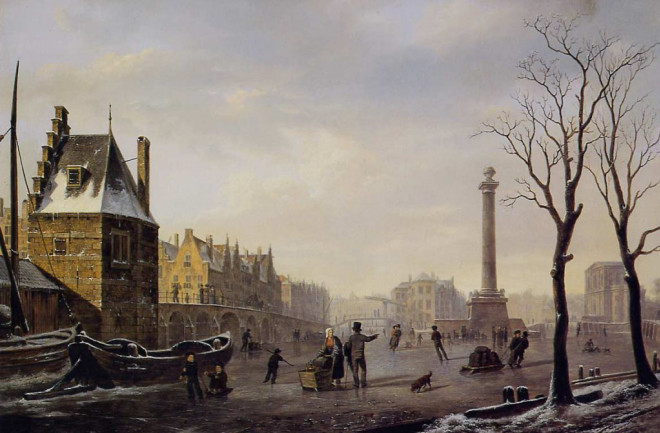 Skaters enjoy a frozen canal in Rotterdam during the so-called Little Ice Age in Germany. A new analysis shows the temperature swings of the past 2,000 years were all regional in nature, unlike modern climate change. (Credit: Wikimedia Commons/Painting by Bartholomeus Johannes van Hove, Circa 1825)

Today’s climate change is unlike any seen in the last 2,000 years, scientists report Wednesday in the journal Nature. New research shows that the civilization-altering warm and cold periods of recent human history, like the so-called Little Ice Age, did not occur across the entire globe but instead happened in isolated regions. That’s in sharp contrast to our current era of worldwide warming.

“The warm or the cold that happened over the past 2,000 years was just regional, whereas what we see now is global,” Columbia University atmospheric scientist Nathan Steiger, who authored the new research, said in a press briefing.

The Common Era, another term for “A.D.” — the period since Christ — began two millennia ago. And scientists have divided up the era’s climate history into periods when Earth was warm or cold. Scientists identified these climates by analyzing ancient material extracted from lake sediments, glacier ice, and tree rings in different regions. The samples paint a picture of what the temperature might have been like in those places long ago.

Such records show the first few centuries of the Common Era were warm until about 400 A.D., when the Late Antique Little Ice Age set in. This cold period lasted another 400 years until a second warming period called the Medieval Warm Period took over. Then came the Little Ice Age, another cold period that lasted from roughly 1300 to 1850 A.D. Although the samples were taken from specific locations around the globe, “there’s been this expectation that these climate periods [are] global in scale,” Steiger explained. Steiger wanted to test this assumption.

To find out whether these climate periods of the past were truly global phenomena, Steiger and his team drew on data collected at some 650 locations around the globe, including every continent and ocean. The data revealed cold and warm periods did not happen uniformly across the globe. During the Little Ice Age for example, the coldest temperatures during the 15th century hit in the central and eastern Pacific Ocean, but in northwestern Europe and southeastern North America, the coldest temps hit during the 17th century, the team reports.

In contrast, since the Industrial Revolution about 150 years ago, the warmest temperatures have happened across 98 percent of the globe.

“We feel we have a really robust case to make that these [earlier] periods were not globally coherent as previously thought,” Steiger said. “And that stands in stark contrast to the contemporary warm period where it really is very much globally coherent.”

The researchers went on to show that natural fluctuations in climate caused the preindustrial warm and cold periods. In two other papers also published Wednesday in the journal Nature Geoscience, researchers show large volcanic eruptions were a key driver in global temperature changes before the Industrial Revolution.

The team did not specifically look at what is driving the current warming trend because they say that’s already been done. “The evidence is always agreeing that [it] is anthropogenic causes,” said the University of Bern’s Raphael Neukom, an expert in ancient climates who led two of the studies.