Uncovering the Secrets of Blood Falls 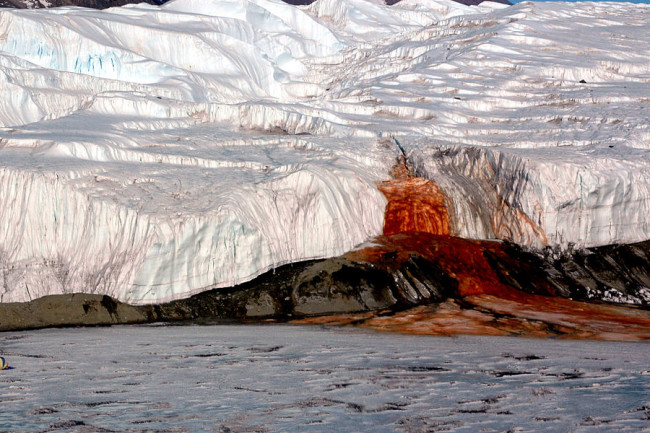 In the McMurdo Dry Valleys of Antarctica, pristine glaciers are marred in one spot by a striking feature: a crimson stain on the white cliffs, looking not unlike a gaping wound in the ice. The five-story gash goes by the unnerving name of Blood Falls, although the color is not at all organic in nature.

The salty water that seeps from the glacier is actually stained red by its rich iron content, and harbors a community of extremophile microbes. How that water came to be there, and how it continues to flow even in conditions well below freezing has puzzled scientists ever since the falls was discovered in 1911.

Now, using high frequency radio waves, a team of researchers has mapped the streams that feed the waterfall, tracing them back through channels in the ice and finding evidence to support the theory that such streams exist all over Antarctica.

Lead author on the study is Jessica Badgeley, who participated in the research as an undergraduate at Colorado College. She and her co-authors criss-crossed Taylor Glacier above the falls to track the path the briny water takes as it makes its way to the outlet, and found that it flows through a series of deep channels cut into the ice that serve to force water out of subglacial caverns and into the open. They published their work Monday in the Journal of Glaciology.

The water likely comes from a large reservoir of seawater that was capped by the glacier millions of years ago and cut off from the ocean. Iron and other sediments leach into the reservoir, and some of this briny water flows downhill through the ice to emerge as a blood-red stream near Lake Bonney. The water only flows intermittently, but it has been a consistent feature for years, raising the question of how liquid water has existed for so long in the same place. 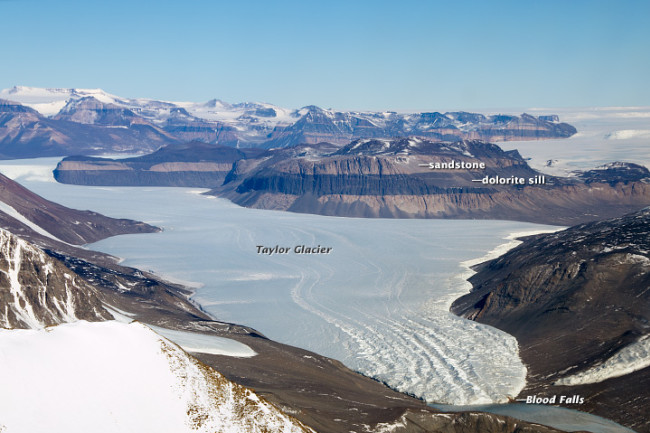 Taylor Glacier, as seen from above. (Credit: Wikimedia Commons)

The salt content of the water helps to explain the mystery, of course, as salty water freezes at lower temperatures. But, the researchers say that the presence of salt should only lower the freezing point by about seven degrees Celsius, and the average temperature of the ice is -17 degrees C. The other ten degrees, they say, can be explained by a counterintuitive force — the formation of ice itself. This is because as water freezes, the heat it loses has to go somewhere. Inside of a glacier, that heat will get radiated to the surrounding ice, warming it up slightly. Based on measurements of ice temperatures from previous studies, they say that this process could potentially raise ice by the ten degrees necessary to keep the water flowing.

While the researchers have helped to explain an interesting phenomenon, their work also adds to our understanding of how glaciers move. In recent decades, glaciers have been picking up speed as the climate warms, threatening to raise sea levels even further. While there are multiple mechanisms that can affect glacier speeds, the strength and composition of their bottom-most layers plays a significant role. The kind of salty, debris-ridden ice that makes up the bottom of Taylor Glacier is much softer than clean ice, allowing the glacier to move at speeds up to 20 times faster than expected for a normal glacier.

In addition, when briny water carves tunnels through the ice, it can undermine the structure of the entire glacier, causing it to fracture and move more quickly. Though it may be a curiosity today, the festering presence of Blood Falls could be a harbinger of injury to come.