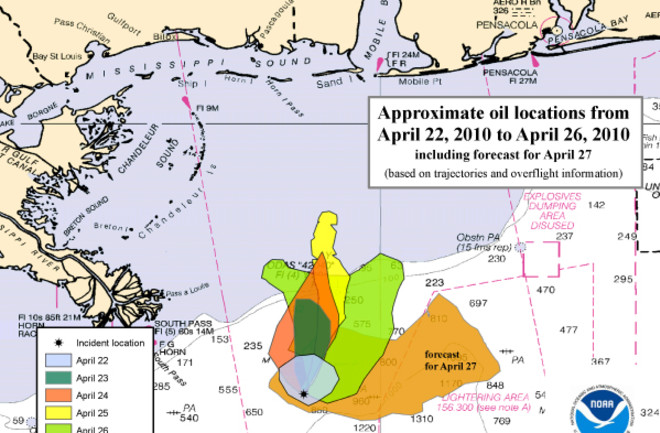 Over the last few days, estimates had held that the Gulf of Mexico oil spilling was leaking about 1,000 barrels, or 42,000 gallons, into the water each day—bad, but still not historically bad on a scale like the spill caused by the Exxon Valdez. Except now, after closer investigation, the National Oceanic and Atmospheric Administration says that oil company BP's estimate might in fact be five times too low. Rear Adm. Mary Landry, the Coast Guard's point person, gave the new estimate yesterday as the Coast Guard began its planned controlled burn of some of the oil.

While emphasizing that the estimates are rough given that the leak is at 5,000 feet below the surface, Admiral Landry said the new estimate came from observations made in flights over the slick, studying the trajectory of the spill and other variables [The New York Times]

. Because the oil below the surface is so hard to measure or estimate, NOAA's numbers are still rough estimates, too. BP's chief operating officer told ABC News he thinks the number is probably somewhere between the two estimates. But if NOAA's high-end number right, the oil spill caused by the explosion and sinking of the Deepwater Horizon just entered a new class of awful. Do the math: At the previous estimation—1,000 barrels (42,000 gallons) of oil per day—it would have taken this spill 261 days, or more than eight continuous months, to dump as much oil into the sea at the Exxon Valdez did near Alaska in 1989. But, if it's true that 5,000 barrels (210,000 gallons) are entering the Gulf each day, it would take just 53 days to top the Valdez' total of 11 million gallons. Already 9 days have passed since the explosion. While the Coast Guard commenced burning off some of the oil to try to keep the worst of it away from American shorelines, and BP's attempted to reach emergency valves with undersea robots, company CEO Tony Hayward is preparing a new strategy.

The London-based Hayward was in Louisiana on Wednesday looking at progress in fabricating a 100-ton steel dome the company hopes to lower over the oil leak. The dome could be ready by the weekend, but it would take two to four weeks to put it in place, if that can be done at all. The dome would funnel oil, natural gas and seawater into a pipe leading to a floating processing and storage facility [Washington Post]