Uh-Oh: Another Quake Could Be Looming on Haiti's Main Fault 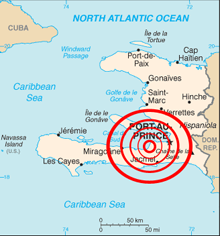 As doctors try to contain the lethal outbreak of cholera in Haiti, geologists have more bad news for the island nation. The disastrous earthquake that struck in January did not release the stress on the main east-west fault that underlies Haiti, but in fact probably originated from a separate fault line, according to separatestudies out in Nature Geoscience. That means Haiti is in danger of more major earthquakes.

Directly after the earthquake, some geologists said the most likely cause was Haiti's Enriquillo-Plantain Garden fault, which has been building up pressure since the mid-1700's. But not so, according to Eric Calais of the U.S. Geological Survey, who now says that an unmapped fault now named Léogâne was probably the source of the January disaster.

At first, scientists focused on the Enriquillo-Plantain Garden fault on Haiti's southern peninsula -- one of two main faults in the region. But the team said measurements of ground motion suggest the movement caused the surface to bulge, but not to rupture. Calais' measurements led them to conclude a previously unknown fault must have caused the January quake. [ABC News]

That was confirmed by the second study, led by Carol Prentice.

In a look at Haitian streambeds displaced by the quake, the team used satellite images, aerial photos, LIDAR and field investigations to compare the 2010 event to past major quakes in the 1700's.They find the 2010 quake did not cause the kind of displacements on the surface as large past events. [USA Today]

It is possible that the Enriquillo-Plantain Garden fault moved a little during the January quake, but down at depth. Earlier studies also saw a small pressure release from the fault, and those researchers agreed: However you look at it, that fault line is still under intense pressure, just waiting to unleash a ferocious quake.

Calculating the pentup strain since the 18th century, they said "an earthquake larger than the 2010 is certainly possible" if the fault ruptured adjacent to Port-au-Prince. [AFP]