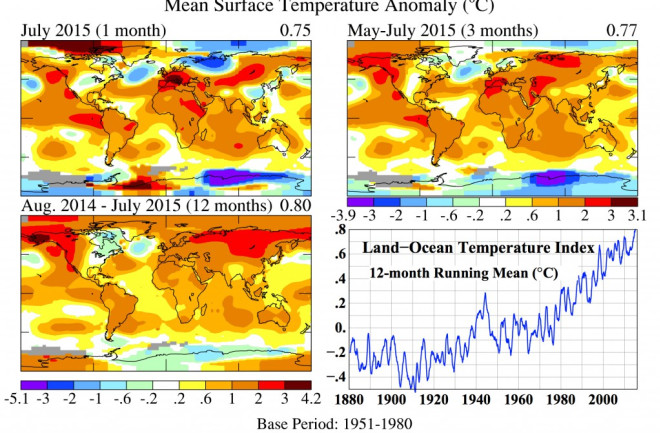 Mean surface temperature anomalies for the past month, the past three months, and the past 12 months. (Data: NASA GISS. Maps and graph: Makiko Sato, Columbia University) Last month was the warmest July on record globally, according to independent analyses by NASA, and by the Japan Meteorological Agency. With a significant El Niño likely to continue through the end of the year — and possibly peak as one of the strongest on record — it's looking ever more likely that calendar year 2015 will go down as the warmest on record, and possibly by a large margin.

SEE ALSO: Latest El Niño Forecast: Expect It to Last Into Spring and Possibly Peak as One of the Strongest on Record

The maps above show how temperatures have varied from the long-term average, using data from NASA's Goddard Institute for Space Studies. July is in the upper left, the past three months at upper right, and the past 12 months are at lower left. Most of the world has obviously been warmer than average, but a good deal of regional variation is evident — especially blobs of coolness over North America and the North Atlantic. So for many of us in the United States, it hasn't seemed so bad this summer. But look at that angry red and rust colored splotch over Europe in July. And the orange and red tones across most of the rest of the world for May through July. As Andrew Freedman, Mashable's excellent weather and climate correspondent, puts it:

It's been a cruel, cruel summer for millions of people across the Northern Hemisphere. Extreme heat has been blamed for thousands of deaths from India to Egypt, on northward into Europe and west to the Pacific Northwest cities of Seattle and Portland. Even Japan and Hong Kong have set all-time high temperature records and passed historical heat wave markers.

In his post, Freedman notes that it is very difficult to pin individual extreme heat events on human-caused global warming. But it has increased the odds of these events occurring. Observations also show that severe heat waves have been on the increase — just as climate modeling studies predict. The graph in the lower right of the graphic at the top of the post smooths out the month-to-month regional variations seen in the maps by using a 12-month running mean. I can't help but note that if next month continues the long-term trend, they'll have to modify the graph — because otherwise that blue line will go straight off the top. So much for the so-called "global warming hiatus."

NASA is not alone in finding that July was the warmest on record, as this graph from the Japan Meteorological Agency shows. I can't help but notice how much that sharp uptick in the past two Julys resembles the spike that peaked in 1998. A super El Niño helped boost global temperatures that year. And that brings me to an unsettling question: What will next July look like? Have we not seen nothing yet? Weather and climate can be fickle. But if I were a betting man...