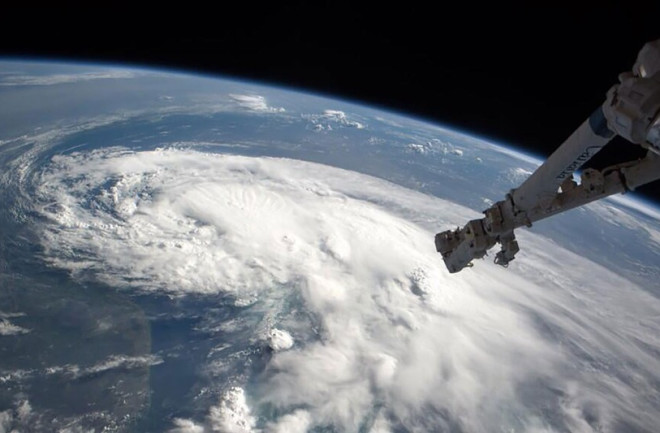 Tropical Storm Arthur swirls off the coast of Florida this morning in a photo shot by astronaut Reid Wiseman aboard the International Space Station. (Source: Reid Wiseman/NASA) If you were hoping to hang on the 4th on the beaches of the Carolinas, Tropical Storm Arthur — which will likely be declared a hurricane soon — just trashed your plans. And forget about heading for Hatteras Island: A mandatory evacuation order has just been issued for the island, beginning at 5:00 a.m., Thursday, July 3, 2014. After 5:00 a.m. Thursday, no access will be allowed.

As the map above from the National Hurricane Center shows, much of the South Carolina coast is under a tropical storm warning. And that ugly swath of red indicates a hurricane warning, which stretches from South Carolina all the way up the North Carolina coast. Since my first post

about Arthur yesterday, the forecast track has been nudged a bit to the west, raising the threat to the Carolinas. This is no storm to be complacent about, so if you're on Hatteras Island take the evacuation order seriously and get out as soon as you can. As the National Hurricane Center forecast discussion

Both NOAA and Air Force reconnaissance planes are once again sending data from Arthur. The data suggest that the cyclone is gradually strengthening and the wind field is expanding. Satellite images indicate that the cloud pattern is becoming better organized with an eye feature surrounded by moderate convection. Based on the above information, the initial intensity has been increased to 60 knots at this time. There is still some mid-level dry air in the vicinity of Arthur that is currently limiting significant intensification. However, given an otherwise favorable environment of warm water and weak wind shear, the NHC forecast calls for Arthur to become a hurricane within the next 12 hours. Global models, primarily the ECMWF and the GFS intensify the cyclone significantly, and also expand the wind field as the center moves near the North Carolina coast.

You see can something that looks eye-like in this image captured by NASA's Terra Satellite this afternoon:

Tropical Storm Arthur off the coast of Florida on Wednesday afternoon. (Source: NASA) The convection referred to by the National Hurricane Center in its forecast discussion comprises the curving band of towering clouds around that eye-like feature. I'll be keeping an eye on the situation, so check back for more.