Tropical Cyclones Parade Across the Pacific 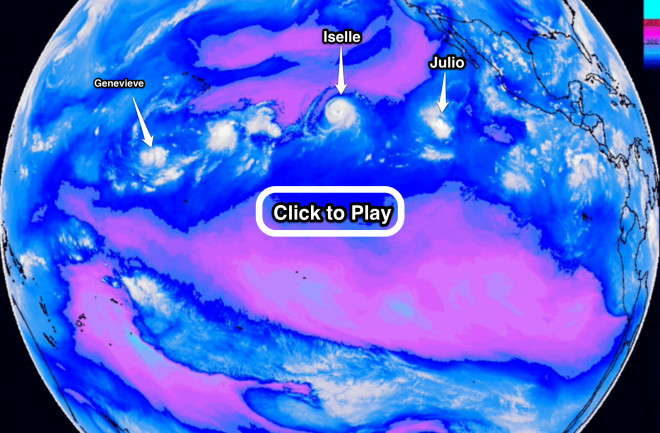 Screenshot of an animation showing patterns of water vapor in the atmosphere. Magenta color indicates areas where clear, dry air penetrates lower in the atmosphere. White areas show areas of high water vapor — including in three storms swirling in the Pacific Ocean between Aug. 3rd and 8th, 2014. (Source: NOAA) Tropical Storm Iselle made landfall on the Big Island of Hawaii today, Aug. 8th — only the second tropical storm in recorded history ever to do so, and one of four cyclones that have been swirling in the Pacific Ocean. Iselle struck with winds of 60 miles per hour, and it brought torrential rains of 4 inches per hour or more. Here's what all that rain has wrought:

See what Hurricane #Iselle did to a little waterfall in Hawaii http://t.co/enluLwramgpic.twitter.com/2Oj3Ei5mwN — NBC News (@NBCNews) August 8, 2014

Following on Iselle's heels is Hurricane Julio, which luckily is forecast to skirt just north of the Hawaiian Islands. And out to the west are Hurricane Genevieve, which does not pose a threat to land, and Typhoon Halong, which most definitely does. Halong is a big and dangerous typhoon that's already lashing Japan with rainfall. It is moving slowly and is poised to lumber ashore at Shikoku Island Saturday evening, bringing maximum sustained winds of between 75 to 90 miles per hour. The image at the top of the post is a screenshot of an animation based on GOES weather satellite data showing a parade of three of the four storms swirling just north of the equator in the Pacific Ocean between Aug. 3rd and 8th. Click on it to watch the animation. It reveals patterns of water vapor in the upper atmosphere, with magenta coloring showing areas with a dearth of water vapor and thus relatively clear air. White areas show where the concentration of water vapor is high — including in the cyclones: Genevieve, Iselle and Julio (which I've marked in the screenshot). Hurricane Iselle is in the middle. To the east (right) is Hurricane Julio, following on fast after Iselle. And to the west (left), is Hurricane Genevieve, which develops dramatically over the course of the animation.