Tropical Animals May Get a Dangerous Metabolic Jolt From Climate Change 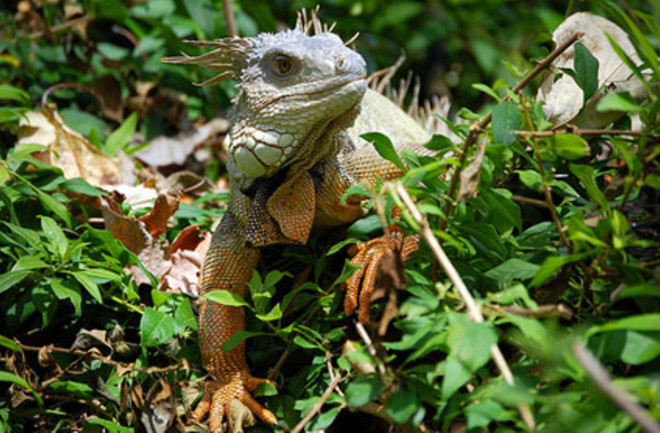 While the temperature effects of climate change are expected to be less dramatic in the equatorial regions, the cold-blooded tropical animals that live there may be in for a dramatic shock. A study published this week in Nature focused on these cold-blooded animals--including insects, amphibians, and lizards--whose body temperatures are not constant, but instead rise and fall with the temperature of their environment. The researchers found that these creatures show great increases in their metabolism from slight changes in temperature; the metabolic increases were on the order of twice that of warm-blooded animals.

"The assumption has been that effects on organisms will be biggest in the place where the temperature has changed the most," [first author Michael] Dillon said. "The underlying assumption is that ... no matter where you start, a change means the same thing. But with physiology, that's rarely the case." [Scientific American].

This means that though climate change will be more extreme in toward the Earth's poles, the cold-blooded animals that live near the equator (where changes should be milder) may react more strongly to the changes. The team found this correlation by looking at readouts from temperature records from 3,000 weather stations around the globe, which collected six readings a day between 1961 and 2009. They ran this temperature information through models to determine how the changes over the last 50 years has affected the metabolism of cold-blooded animals.

The findings suggest that these tropical animals will feel the brunt of increased metabolism brought on by climate changes.

While the idea of having a higher metabolism isn't considered bad for people looking to lose their wealth of stored energy (i.e. fat), the researchers are worried about how it might affect the the future of these species, some of which live in areas where food and water is limited.

Dillon speculates that sped-up ectotherms [cold-blooded animals] in the tropics might become more vulnerable to starvation if resources can’t keep pace, he speculates. “If you’re burning more energy, you need more energy,” Dillon says. Food webs may shift. Soil respiration may increase. Mosquitoes may breed faster. Also, in the tropics, Dillon says, “the potential for big impacts on a global scale is the highest there simply because the biodiversity is the highest.” [Science News]