When Eric Olofsson talks cars, his main point of reference is human power, not horsepower. To illustrate the beauty of Saab's new engine, which reduces fuel consumption and carbon dioxide emissions by 10 percent and slices other emissions by as much as 75 percent, the 41-year-old engineer describes a lone runner jogging full tilt through a misty forest in his native Sweden. At every step, the runner's heart pumps, and his lungs fill to maximum capacity. When the runner slows, his heart and lungs do, too, taking in less oxygen as he rests. The adaptable human body is everything a car engine is not. "An engine can't change the volume of its lungs— its cylinders," says Olofsson. "They always pump at the same speed."

Eight years ago Saab's engineers began wondering how they could build the flexible capacity our bodies take for granted into pistons and cylinders, forcing them to inhale only as much fuel as they need. Since then, emissions standards worldwide have gotten only tougher. Europeans want fuel-efficient cars that spout less carbon dioxide (CO2), the suspected culprit in global warming. U.S. laws increasingly target emissions of hydrocarbons (HC) and nitrogen oxides (NOx), which make smog. Few people realize that these two goals are at odds with each other. But car designers know that asking to eliminate both is like asking for a pound of flesh sans blood. 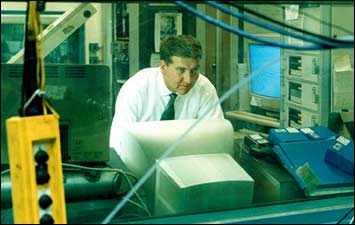 Here's why: CO2 production relates directly to the amount of fuel burned. But the second you trifle with the customary proportion of air to fuel needed for combustion, you risk raising HC or NOx levels. The most fuel-efficient catalytic converter— the auto component that purges HC, NOx, and carbon monoxide from exhaust gases— is a notorious oxygen hog. The traditional method of feeding it is to suck in gobs of air, add a spritz of fuel, ignite the mix in each cylinder, and shoot the excess O2 to the converter. The Saab team members, led by Olofsson and Lars Bergsten, 62, knew that if they could just keep the same air-to-fuel ratio but fill, say, only half a cylinder, they could cut fuel consumption by 10 percent.

Of course, cylinders can't change their volume. Olofsson's team discovered how to get around the problem by recycling exhaust. After each round of combustion, instead of quickly ushering exhaust gases out to the catalytic converter, the Saab engine traps a little exhaust in each cylinder. The hot, oxygen-poor gas expands to fill a portion of the cylinder, which consequently requires less air and fuel for the next combustion cycle. The exhaust gas is just a space filler. By altering the exhaust level as the car runs, the cylinders supply themselves with just the right amount of fuel and air they need at any one time— as befits a pair of mechanical lungs.