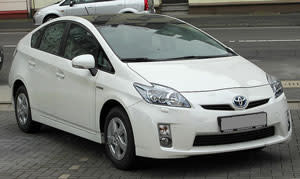 The Toyota Prius is one of the cars targeted by the new regulations.

, whose quiet engines may pose a danger to unaware pedestrians. This is the agency's first major step towards implementing the Pedestrian Safety Enhancement Act

, which requires automobile manufactures to equip new electric and hybrid vehicles with sound systems that alert pedestrians of the approaching machines. But the move has come under fire by some green car advocates, who stress a lack of studies showing that such warning systems

would actually make the streets safer for pedestrians:

The difficulty is that there's simply not enough data on actual pedestrian injuries and deaths attributable to quieter cars. Part of that reflects a lack of categories to reflect such a problem, and the low incidence of pedestrian injuries in general. [A] 2009 NHTSA report highlighted its own weaknesses: It was based on data from only 12 states (the ones that record Vehicle Identification Numbers) and limited to injuries from 2000, when hybrids first entered the U.S. market. The result: a small, possibly non-representative sample set.