Tracking Nitrogen Through the Soil to Reduce Pollution From Agriculture

Scientists are uncovering how nitrogen migrates underground with the help of sensors that continuously measure nitrate concentration and water flow. 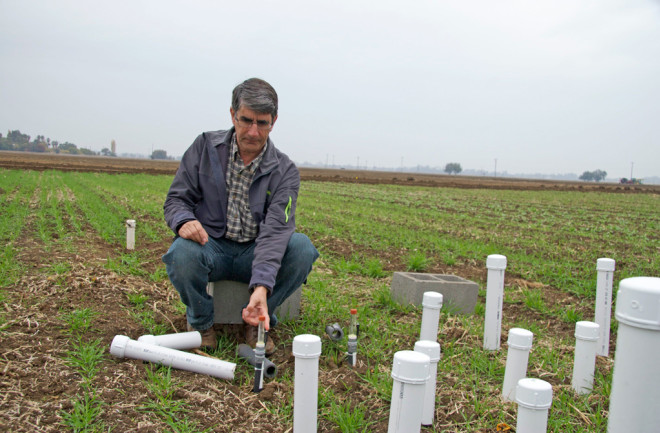 On this gray, drizzly winter morning, the California coastal mountains in the distance look like a mirage hovering over a flat swath of fields at Russell Ranch, a 300-acre experimental farm in the Sacramento Valley. One of the researchers in charge is Martin Burger, an angular, intense-looking Swiss ecologist. He steps out of his Ford F-150 pickup and leads me down a gravely path to a field covered in neat rows of lime-green triticale — a cereal grain — and bean shoots.

Above ground, the scene looks orderly and static. But Burger and his colleagues at the University of California at Davis are interested in what lies hidden below the surface. Down there, it’s a highly dynamic and far-from-predictable scene. To get a glimpse, they have buried an array of instruments that can trace the trajectory of nitrogen. They are trying to help solve the many ecological and human health problems caused by this troublesome element while helping farmers grow crops more efficiently.

Nitrogen has many faces. It is an essential element on the periodic table. No organism, plant or human, can survive without it. Yet there is a short supply of accessible nitrogen in the world. In fact, had scientists not created synthetic, mostly natural-gas-based fertilizer decades ago to improve nature’s method of “fixing” nitrogen — a process of breaking nitrogen molecules apart to make them available to plants — neither you nor I, nor most of the 7 billion people crowding the planet, would be here today.

But here’s the rub: Chemical companies turn nitrogen found naturally in the atmosphere into ammonium and nitrate compounds that make up fertilizer. Soil microbes eventually transform the ammonium into more nitrate. This water-soluble form of nitrogen is a source of food for plants, but it makes a Jekyll-and-Hyde-like transformation when excess leaks into lakes and streams or groundwater.

Nitrate can go from helpful to harmful, choking fish and their habitat by stealing oxygen, and contaminating human drinking water. Exposure to high levels of nitrate in groundwater has been linked to “blue baby syndrome,” which can kill by blocking the blood’s ability to carry oxygen. The EPA also has linked nitrate in drinking water with thyroid cancer, respiratory tract infections, birth defects and premature births.

To make matters worse, some of those excess nitrate molecules in the soil undergo another chemical change: Microbes help turn nitrate into gaseous nitrous oxide, which has roughly 300 times the global warming potential of carbon dioxide. In the end, crops use less than half of the nitrogen that farmers apply to the soil, on average.

Back at the Ranch

At Russell Ranch, scientists are uncovering how nitrate migrates. To start, they are studying how commercial crops, including tomatoes, wheat and almonds, can use nitrogen more efficiently without leaving excess nitrate to percolate into aquifers or run off fields. What makes nitrate such a vexing subject is that so many variables — including crop type, soil characteristics, field gradient and precipitation — dictate the speed, flow and amount that escapes. Sometimes it can take decades, even centuries, for it to move from a farm to a distant well used for drinking water, making it hard to pinpoint exactly which farm is a source of nitrate pollution.

In fall 2011, Burger and UC Davis hydrologist Jan Hopmans started a three-year experiment, comparing how different cover crops, which are seasonally rotated with cash crops such as tomatoes, can be used to improve soil quality and reduce fertilizer use. Some cover crops, such as fava beans, “fix” atmospheric nitrogen. They help the soil stockpile nitrate, allowing farmers, in theory, to apply less nitrogen fertilizer on the next set of crops planted in that field. Other types of cover crops bring excess nitrate to the surface, keeping it away from groundwater.

There is also the issue of irrigation. When Burger and Hopmans started, they knew tomatoes weren’t capturing a lot of nitrogen, especially when they were watered with furrow irrigation. That is when water runs through channels alongside each raised row. The researchers suspected different, more targeted, irrigation methods would help reduce nitrate runoff and improve plant efficiency.

With new insight about potential cover crop benefits and irrigation pitfalls, what still eluded the UC Davis nitrogen sleuths was precisely how nitrate travels once it flows into the soil and through the root zone of various crops.

To answer this question, they took their previous research to new depths, literally. They designed instruments that would accurately and continuously measure nitrate concentration and water flow farther down into the soil than what had been measured before. Their machinery is spread out over six one-acre plots scattered across 70 acres. Several thousand units of data pour wirelessly into a computer in Burger’s lab from the field’s central nervous system.

Burger unlatches the door of a solar-powered metal cabinet perched on a pole at the edge of a field. A spaghetti of multicolored wires is inside. Some of the wires are connected to sensors under the crops. “Too much information,” he quips, shaking his head. He will enter it all into a computer model that simulates water flow and nitrogen transport under various irrigation and weather conditions, so that researchers can get the full picture of what is happening underground.

Soil moisture sensors show, over time, how much water has gone into the ground, and how much has left, either from drainage or in the form of evapotranspiration from plants. Burger points out some small red flags among the triticale in one of his plots. They mark where instruments called lysimeters, ceramic plates about  1 foot in diameter, are buried at various depths down to about 47 inches. They measure the amount of water flowing past.

Another set of sensors measure electrical conductivity, which Burger says can be used as a proxy for measuring nitrate. (Nitrate increases electrical conductivity.) The researchers can trace the nitrate using stable (non-radioactive) isotopes, which are essentially unique atomic signatures for nitrate from different sources.

They grab water samples by applying suction to ceramic cups buried at various levels in the soil. Each sample is brought to the surface, analyzed for its nitrate concentration and labeled with an isotopic signature. Nitrate sitting on the fields at the beginning of the rainy season is also labeled. Much of this has been left over from last year’s fertilizer use. Later in the spring, they can measure how much of the leftover nitrate on the surface ended up in cover crops and how much made its way into each soil layer.

Burger gazes across his plot to the south toward the nearby creek that feeds into the Sacramento River and finally into the Pacific Ocean. “From the label, you can see how far the nitrate is traveling,” he says.

As he strokes a slim triticale shoot at his feet, Burger talks about his experiment’s initial results. “We do know that nitrate is leaching past the root zone during the tomato growing season,” even though applying fertilizer and irrigation water together has helped reduce runoff, he says. What has surprised Burger is that triticale has deeper roots — about two feet deeper — than fava beans. So, despite not being nitrogen-fixing, triticale may be better at capturing leftover nitrate.

Burger hopes his research can apply to farmers and scientists facing similar challenges as far away as Chesapeake Bay and the Mississippi River Basin, where there are enormous dead zones. Based on the results, Burger and Hopmans will ultimately be able to offer recommendations for irrigation methods, fertilizer use and cover-crop plantings that help curb nitrate contamination and increase yields.

Hydrologist Thomas Harter, also from UC Davis, posits that even these best-management practices can only go so far. For many crops that need a lot of nitrogen, such as vegetables, corn and nuts, “we don’t know today whether farming practices will ever be good enough to produce drinking water quality recharge,” he says. (Recharge refers to water that escapes from fields into groundwater.) But farmers can learn to contain nitrate within their systems more carefully, he says. And regulators can step in. He has recommended that California lawmakers consider imposing economic penalties and incentives for farmers, such as excise fees on nitrogen fertilizer applications, with higher rates applied to areas declared to be at risk for nitrate contamination.

In recent years, some growers already have dramatically reduced the amount of water and synthetic fertilizer they use by practicing precision farming techniques, such as drip irrigation, which reduces the overall amount of water used and therefore nitrate runoff. They have managed to achieve these reductions without sacrificing profits. Despite facing what seems like a challenge made for Sisyphus, Harter harbors far more hope than dread for the future. “If we can get the worse half (of growers) to operate like the best half over five years, and then do it again, in 10 years everyone will operate as the best, and we’ll have come a long way,” he says.

Back at Russell Ranch, Burger continually contemplates the connection between farming practices and distant households. “It would be great if we made a contribution toward safer drinking water,” he says.

[This article originally appeared in print as "The Nitrogen Underground."]