Totally Insane! Buffalo Suburbs May Have Set a Record for 24-Hour Snowfall in a Populated Area 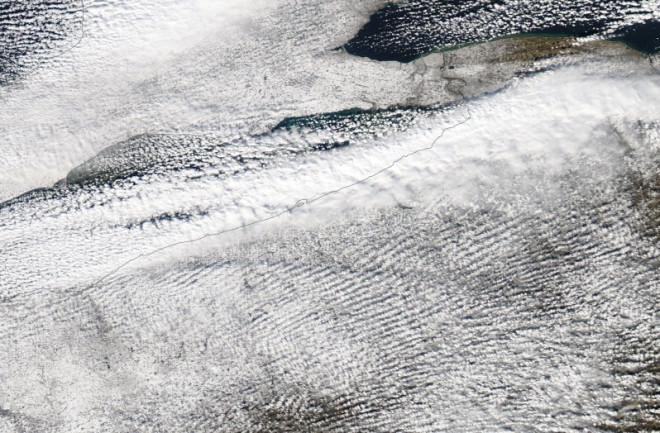 NASA's Aqua satellite captured this view of clouds streaming across Lake Erie toward Buffalo and Erie County, New York on Tuesday— where they dumped gargantuan amounts of snow. (Source: NASA) The national record for snowfall in a 24-hour period is 76 inches, up in the mountains of Colorado. Some suburbs of Buffalo approached that amount on Tuesday — "possibly the highest 24hr snow in a populated area," the National Weather Service Tweeted late Tuesday night. Unfortunately, four people have lost their lives as a result of the snow. And it's not over yet! As I'm writing this early Wednesday morning, the National Weather Service is forecasting more snow well into the day — and then even more through Thursday night:

ACCUMULATIONS...5 TO 10 INCHES OVERNIGHT...UP TO 2 INCHES WEDNESDAY. HIGHEST TOTALS 5 TO 6 FEET FROM LACKAWANNA TO LANCASTER AND ELMA FROM THE FIRST STORM ENDING ON WEDNESDAY. ADDITIONAL ACCUMULATIONS OF UP TO 2 FEET IN THE SECOND STORM LATE WEDNESDAY NIGHT THROUGH THURSDAY NIGHT IN PERSISTENT BANDS.THE HEAVIEST AMOUNTS MAY AGAIN FOCUS ON THE BUFFALO SOUTHTOWNS.

It has been a classic lake effect snowfall — but on steroids this time.

Two ingredients have come together to create this insane amount of snowfall, according to the Cooperative Institute for Meteorological Satellite Studies (CIMSS): cold arctic air, with surface temperatures in the upper teens and lower 20's, flowing across the waters of Lake Erie, which were still as warm as the middle 40's. Cold air cannot hold much of the water vapor it picks up from warm waters, so it condenses, forming clouds. The prevailing westerly winds blow the clouds toward western New York, where the moisture falls as snow in the cold temperatures. You can see that effect quite clearly in the image at the top of this post, captured by NASA's Aqua satellite on Tuesday. Note the thick but relatively narrow band of clouds streaming across Lake Erie. Here's a timelapse video showing what it looked like on the ground as snow squalls moved off the lake and into the southern part of the city:

And here's what the stream of moisture flowing across Lake Erie looked like from space:

An animation of images from the GOES-13 weather satellite shows large lake effect cloud bands over both Lake Erie and Lake Ontario on Tuesday, Nov. 18, 2014. (Source: CIMSS) This animation of weather satellite images shows large bands of lake effect snow over both Lake Erie and Lake Ontario. "The band over Lake Erie was nearly stationary for several hours, producing snowfall rates as high as 4 inches per hour at some locations," according to the CIMSS.

It is straight up ridiculous south of Buffalo this morning. Via @IrishEagle. Posted by Melanie Walgate. #LakeEffectpic.twitter.com/80ldgtPoN2 — Eric Fisher (@ericfisher) November 18, 2014