If you're planning a road trip this summer, you might want to add one or all of these great science destinations to your itinerary. 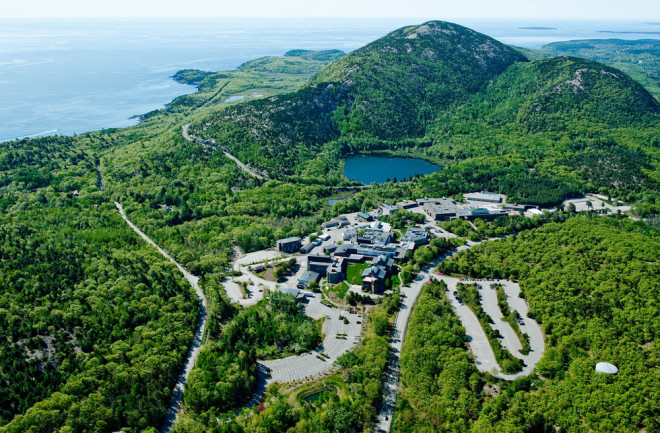 The indigo waters off Key Largo are teeming with biodiversity, but over-fishing, pollution and climate change are taking their toll. You can strap on scuba gear and help researchers monitor more than 400 fish species affected by human activity by joining REEF in a weeklong diving survey.

Dive Into the Blue: REEF surveys show the goliath grouper (Epinephelus itajara) is making a comeback thanks to international and federal protections. Because the fish can grow to 800 pounds, it takes a long time to reach reproductive maturity. By 1990, after decades of overfishing, the slow-growing grouper had nearly disappeared from local waters. It was listed as critically endangered in 1994 by the International Union for Conservation of Nature. Now, however, while the population is still in recovery, REEF volunteers are almost guaranteed a goliath grouper sighting in certain locations.

Wrecked Reefs: Ship grounding is an all-too-common problem in the shallow waters of the Florida Keys. In 2012, 236 ships ran aground, damaging coral reef systems that can take thousands of years to heal. REEF visitors monitor their slow rebound by surveying returning species.

Fish Tech: REEF survey data is entered into a free database for scientists, conservation groups and community members. So far, the information has been cited in more than 50 scientific publications; it has helped researchers analyze shark population declines and identify two new species of colorful fish — the Florida barred hamlet (Hypoplectrus floridae) and the contoy hamlet (H. ecosur).

Land Lovers: Hiking, bird-watching and other sea-free activities are available at the nearby Everglades National Park and Great White Heron National Wildlife Refuge, each about an hour from Key Largo by car or boat. For a more adventurous day trip, ferries and seaplanes depart from nearby Key West, carrying visitors 68 nautical miles to Dry Tortugas National Park, where sea turtles nest on secluded beaches.

Good to Know: REEF doesn’t teach diving or snorkeling, and although instruction can be arranged through local dive shops, survey participants must have sufficient experience and be comfortable in open water.

Go: Unless you can swim ocean basins with the speed of a dolphin, an airplane is the fastest way to travel. Key Largo is an hour drive from the Miami airport. Travel expenses are not included in program fees, which range from $750 to $2,500 per person, including meals, private lodging and survey workshops.

Go Deeper: REEF also offers outings in the Cayman, Socorro and Caribbean Islands. Participants can seek out sharks and rays in the Sea of Cortez, identify endangered Nassau grouper off Little Cayman and document the consequences of Curacao’s invasive lionfish.— Amy Coombs

The Hanford Nuclear Reservation, a onetime national secret, now hosts both a National Historic Landmark with free, guided tours and a $40 billion environmental cleanup. Part of the Manhattan Project, this site in southeastern Washington produced plutonium for atomic bombs during World War II and the Cold War.

To B or Not to B: Choose between two half-day tours: an in-depth exploration of the deactivated B Reactor, the world’s first full-scale plutonium production reactor; or a sitewide bus tour through Hanford’s history, from its top-secret wartime construction to the U.S. Department of Energy’s present-day cleanup operations.

Book It: Tours run April through September and fill up fast, but don’t worry: Occasional cancellations mean empty seats are sometimes up for grabs.

Good to Know: Tours start in Richland, 25 minutes from Hanford, and have some restrictions. Hanford sitewide tours accept only American citizens 18 and older, for example, but B Reactor tours welcome non-citizens as well as ages 12 and up.

Going Nuclear: The Manhattan Project built the B Reactor in just over a year, coming online in 1944 with the help of Nobel Prize-winning physicist Enrico Fermi. Stare down the reactor’s 46-foot-deep core (sans uranium) or pretend you’re Homer Simpson in its control room.

No Glow: More than 40 years of plutonium production created millions of tons of solid waste and hundreds of billions of gallons in liquid waste, and Hanford’s storage, disposal and record-keeping were, at times, lacking. But visitors are kept safe distances from contamination and cleanup, and the B Reactor, under constant monitoring, is inspected before each tour.

Get Out: Hike through a fossilized forest less than two hours northwest of Hanford at Ginkgo Petrified Forest State Park. Perched on the Columbia River, this park and nearby areas offer camping, swimming, fishing, boating and rock climbing.

Savor: More than 200 wineries, five farmers markets and numerous roadside stands are within an hour’s drive of Richland.

Go: Richland and adjacent Kennewick and Pasco form the Tri-Cities, with the closest airport. But flights into Spokane, a two-plus-hour drive, may be cheaper. Either way, having a car is key.

Maine’s largest island, Mount Desert, is an oasis of vacation activity options. Tour a world-renowned laboratory; hike through Acadia, the first national park in the Eastern U.S.; and take a boat trip to see the “island of barren mountains” from the water, as French explorer Samuel de Champlain first did.

Mouse Tales: Summer tours for visitors ages 12 and up are available for the Jackson Laboratory, a pioneering cancer genetics research institute. The facility is home to the world’s first online genetic database, the Mouse Genome Database, used by biomedical scientists worldwide. Tours run about an hour and are by appointment only.

Tour de Ile: Explore Acadia National Park by bike. Many of the park’s main attractions can be found along the 27-mile Park Loop Road. Or avoid cars on the park’s 45 miles of winding carriage roads.

Heavenly Bodies: Enjoy stunning views of the night sky, including the Milky Way, from the island. Beginning in July, the park service offers stargazing programs, wrapping up in September with the Acadia Night Sky Festival, which includes hikes, workshops lectures and, of course, stargazing.

Rise and Shine: At 1,530 feet above sea level, Cadillac Mountain is the highest point on the East Coast. It’s also one of the first places in the continental U.S. to welcome the sunrise each day. Pack warm clothes for a hike, though! Even during the summer, the mountaintop is chilly before dawn.

Go: Hop on the free Island Explorer bus between Acadia National Park and neighboring villages. Special bus service is offered for cyclists and their bikes from late June through September. Bar Harbor has its own airport, but the nearest major airport is Bangor International Airport, about an hour's drive away. A shuttle runs between Bangor and Bar Harbor for those planning a car-free vacation. Accommodations are available around the island, but Bar Harbor is the main hub.

Go Deeper: Mount Desert Island Biological Laboratory runs weekly Science Cafes year-round, biweekly in the summer. Also during the summer, the lab teams up with the National Park Service for BioTrails: Participating citizen scientists can either collect samples in the field or analyze them in the lab using DNA barcoding. The lab’s annual family science night is July 17 this year. — Allie Wilkinson

Mesa Laboratory, completed in 1966, is recognized as one of the major works of architect I.M. Pei. (Credit: University Corporation for Atmospheric Research)

Nestled against the foothills of the Rocky Mountains, the National Center for Atmospheric Research (NCAR) studies weather, climate and atmospheric science. At its Mesa Laboratory and Visitor Center, guests can touch a cloud, make a tornado and even steer a hurricane.

Tour It: The Mesa Lab is open 8 a.m. to 5 p.m. on weekdays and 9 a.m. to 4 p.m. on weekends, 363 days a year. Employee-led tours are available at noon Mondays, Wednesdays and Fridays; self-guided audio and tablet tours are offered throughout the day. All tours are free.

Spherical Science: Want more science? Stop by NOAA’s David Skaggs Research Center, less than 10 minutes away from the Mesa Lab, for its free public tour at 1 p.m. Tuesdays. See animated planetary data on a 6-foot globe and stop by the National Weather Service Forecast office on this 90-minute tour.

Art-Sci: Art and science collide at the Mesa Lab’s three art galleries. From July to September, photographs by Extreme Ice Survey (EIS) Director James Balog will be on display. From October to December, look for the work of fellow EIS member Tad Pfeffer. Both photographers showcase changing landscapes.

Unwind: Fishing, hiking, biking, kayaking and rock climbing are just some of the ways to experience nature around Boulder. More hiking trails and photo ops await at Rocky Mountain National Park, an hour north of Boulder. The adjacent Indian Peaks Wilderness has great hiking, too, and with fewer people.

Go: The nearest airport is Denver International Airport, a 45-minute drive to the south. Get directions, find lodging and learn more about the area online.