To Clean Up An Oil Spill, Light a Fire Tornado 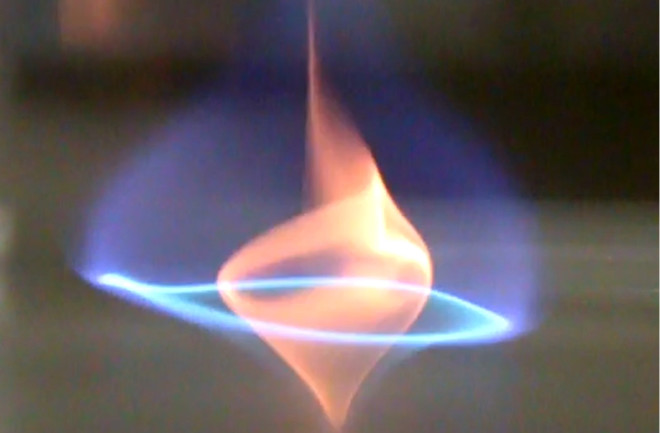 A "blue whirl" formed in the lab. (Credit: Xiao et. al/University of Maryland)

The best way to clean up an oceanic oil spill might be to light a fire tornado on top of it. That's the conclusion drawn by researchers from the University of Maryland, who found that, under controlled conditions, a fire whirl was the most efficient way to burn hydrocarbon fuel.

That could come in handy the next time an oil slick, like 2011's Deepwater Horizon spill, occurs. Simply burning the slick off has been proposed as a method for dealing with the oil, releasing tons of environmentally-damaging compounds into the air. With a cleaner flame, however, the slick could be cleaned up more responsibly. These fire whirls could also potentially be used in combustion power plants as a way to generate power with less waste.

"Fire whirls are more efficient than other forms of combustion because they produce drastically increased heating to the surface of fuels, allowing them to burn faster and more completely. In our experiments over water, we've seen how the circulation fire whirls generate also helps to pull in fuels. If we can achieve a state akin to the blue whirl at larger scale, we can further reduce airborne emissions for a much cleaner means of spill cleanup," says Michael Gollner, a co-author of the paper in a press release.

Fire whirls can be a destructive phenomenon. In nature, intense winds generated by a fire can begin to circulate violently in the right conditions, whipping the flames around and upwards into a towering inferno much like their non-fiery tornado cousins. The additional air and fuel drawn in by the circulating currents goads the fire into a frenzy, potentially reaching temperatures of 2,000 degrees F.

These "sharkfirenados" can be deadly — one such occurrence following an earthquake in Japan in 1923 was estimated to have killed nearly 40,000 people. Under the right conditions, however, the roaring monster can be tamed and turned into a peaceful blue swirl.

In the lab, the Maryland researchers first created a simple pool fire by lighting a slick of heptane fed by an underwater pipe in a contained environment. By enclosing the fire with two semi-circular sheets and blowing air through, they made a regular fire whirl.

Their goal was to study how these structures are conceived and evolve, but they were surprised to find that fire whirls have another stage: what they call a "blue whirl." In this phase, the blazing column settles down into a small, top-shaped flare with a sharply defined blue ring around it.

According to the researchers, the blue whirl burns hotter and spins faster than a normal fire whirl, leading to much more efficient combustion and far fewer emissions. They published their findings Friday in the Proceedings of the National Academy of Sciences.

It's not entirely clear how the blue whirl forms, although it is likely the product of the vortex gradually reaching an optimal spin rate under ideal conditions. Without any outside perturbations, the researchers say that their creation could likely burn indefinitely. The blue whirl is made possible by the presence of water in the system, they say.

Whereas fire tornadoes typically form above land, the addition of water allows for a region between the surface and the fire where the fuel evaporates and gets mixed together with oxygen before being ignited. This premixing action serves to make the flame more efficient. The rotation of the whirl also helps to bring in more oxygen, increasing the amount of fuel available to the fire. Higher levels of fuel lead to a hotter and more efficient fire, where soot and particulate matter that might escape a normal fire get ignited as well, decreasing the emissions.

Such a process could be applied to oil spills or in coal or natural gas-fueled energy plants, granting cleaner electricity with more efficiency. The exact process by which the fire whirls form and maintain themselves is still a mystery to the researchers. In addition, creating a blue whirl outside of the lab will likely be quite difficult, due to unstable winds and varying terrain conditions.

They say that there have not been reports of any such occurrences prior to this, indicating that fire whirls in nature never make it past the fiery, smoke-shrouded secondary phase. Still, they say it is an important insight into the dynamics of fire whirl evolution.