Throughout the Ocean, Climate Change is Forcing Plankton to Move

"Their distribution is now systematically different from before significant human influence," the researcher says. 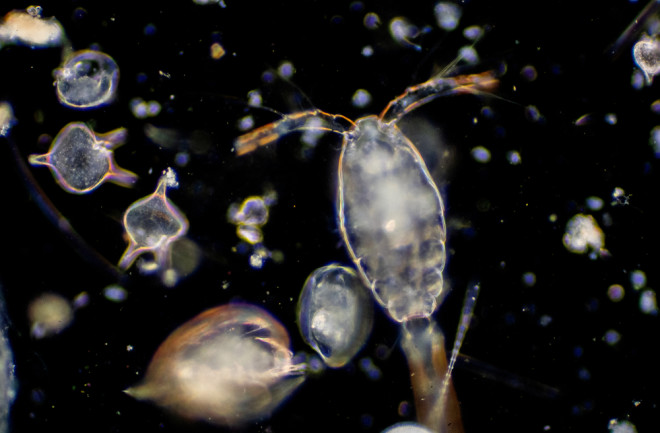 Some of the smallest creatures in the sea are also some of the most influential. Plankton, a group of microscopic marine organisms that includes bacteria, amoebas and snail larvae, among other things, prop up the base of the oceanic food chain. Every sea creature, from clownfish to whales, ultimately depend on plankton for food.

Now, a new study that peers into a past before human influence shows climate change has upset the distribution of plankton across the globe. The finding has implications that could ripple up to affect nearly all of marine life the researchers say.

Most studies that look at how climate change is impacting the oceans show rising temperatures are forcing marine life to change where they live. But the majority of these studies use data collected only after World War II. This means they lack a pre-industrial baseline for comparison, said Lukas Jonkers, a paleoceanographer at the University of Bremen in Germany, who led the new research. To find this baseline, Jonkers examined plankton fossils from foraminifera buried in the seafloor.

Foraminifera are single-celled zooplankton. The animals come in a huge variety of shapes — stars, twisting cones, coils that resemble snail shells and circular blobs. But they all have a hard outer shell. Once buried in the seafloor, the shells remain well preserved. By examining these fossils, scientists can tell what plankton communities looked like before climate change affected ocean temperatures.

Jonkers and colleagues assessed more than 3,000 foraminifera communities from sediment samples that chronicled hundreds or thousands of years of seafloor history. The samples encompassed ecological regions and water temperatures from across the globe. The scientists then compared the pre-industrial plankton fossils to modern plankton communities that they caught in moored, funnel-shaped traps.

The investigation revealed the species that make up modern foraminifera communities differ from their pre-industrial counterparts everywhere in the world, Jonkers said.

“I never expected the results to be so clear,” he said.

The plankton had shifted toward the poles, with a median distance of over 350 miles, though the distance differed greatly between communities. What’s more, past and present foraminifera communities were most different from each other where temperatures had changed the most, the researchers report Wednesday in the journal Nature.

“What this means is that in general plankton species have shifted … to such a degree that their distribution is now systematically different from before significant human influence,” Jonkers said.

Plankton are the foundation of the food supply in the oceans. Every marine organism, including the shrimp, crabs, lobsters and fish we eat, depends on plankton communities. The new findings raise questions about how marine ecosystems will respond to the changing conditions.

“Species all shift range at difference paces and they now need to build new interaction networks, within species, but also with their new environment,” Jonkers said. “But at the moment, we don’t know if they can adapt fast enough to ongoing climate change.”