Three Miles Down in the Carribean, the Deepest Volcanic Vents Ever Seen 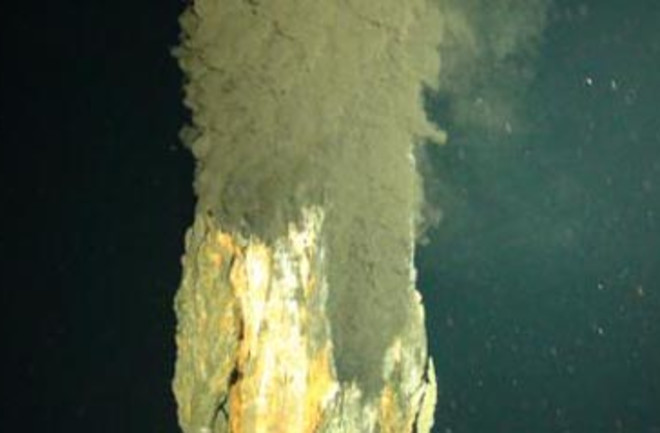 The bottom of the sea is a strange and marvelous frontier, as we were reminded last week by the discovery of the first known animals to live without oxygen. Today a team of British researchers say their undersea robotic explorers have found something new down in the depths of the Caribbean Sea: the deepest hydrothermal vents ever seen.

The black smokers, named for how they spew out an iron sulfide compound that's black, sit 3.1 miles deep in the Cayman Trough in the Caribbean [FoxNews]

. They beat out the previous record holders, which were located 2.6 miles below the surface in the middle of the Atlantic Ocean. As the National Oceanography Centre team sailed across the sea in its research vessel, the James Cook, the scientists deployed their robot explorers down to the inhospitable depths. One, called Autosub6000, mapped the seafloor while another, HyBIS, carried high-resolution cameras to capture these images.

Marine biologist Dr Jon Copley said: "Seeing the world's deepest black-smoker vents looming out of the darkness was awe-inspiring." He added: "Super-heated water was gushing out of their two-storey-high mineral spires, more than three miles beneath the waves" [BBC News]

. The heat record held by the vents in the mid-Atlantic is a scorching 867 degrees Fahrenheit, but Copley and the other researchers say they don't know yet whether this one is hotter. Geologist Bramley Murton reports mats of microbes covering the vents, but the team is conferring with other scientists before they announce exactly what they found. Whatever lives down there, it's certainly got grit.

The pressure at the bottom of the trough, which is 500 times normal atmospheric pressure, would be the equivalent to the weight of a large family car pushing down on every square inch of the creatures that live there, the researchers say [FoxNews]

. You can keep up with the voyage of the James Cook on the team's Web site. They'll be cruising the Cayman Trough until the 20th of this month. Related Content: DISCOVER: Funky Life at an Underwater Hydrothermal Vent (gallery) DISCOVER: Water at Ocean Vents Isn't Water—It's a Gas-Liquid Hybrid DISCOVER: For Microbes, Hell Isn't So Bad DISCOVER: Sweeping the Ocean Floor 80beats: For This Deep-Sea Animal, Oxygen-Free Is the Way To Be 80beats: NASA’s New Underwater Robot Chugs Along Indefinitely on Ocean PowerImage: National Oceanography Centre