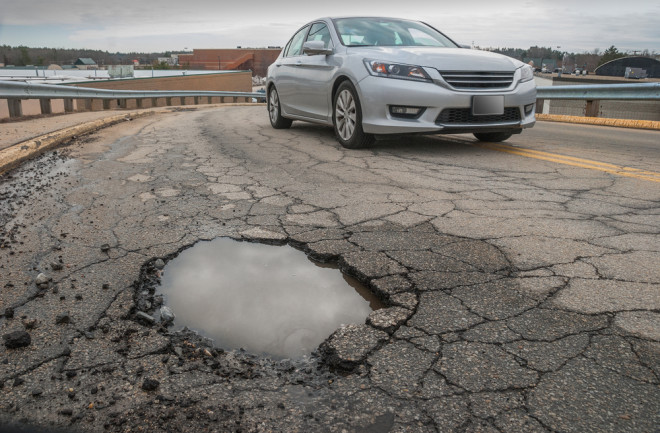 Midwesterners like to joke there two seasons: Winter and road repair. But potholes aren't just frustrating to commuters. They're also a big and costly challenge that engineers face. Extreme heat or cold, water, stress and the good old passage of time all hold the potential to morph roads until they can’t take it anymore, causing them to bend or crack in response. “It's really complicated phenomena,” says Naser Sharifi, a civil engineer at the University of Pittsburgh. “Honestly, before I started working on pavement, I didn't know that this many details are involved.”

And while many streets are supposed to stay drivable for 20 to 30 years, climate change is accelerating wear and tear and pushing engineers to rethink how they design this crucial part of our transit network.

Where Roads Are Worse

Sharifi explains that transit engineers tend to think of different parts of the U.S. according to a couple of key metrics: How dry or wet is the area, and how often is it cold enough to freeze over? When it comes to road durability, “the worst-case scenario is wet-freeze regions.” Much of New England and the Midwest falls into this category.

When it’s warm enough, moisture on the road seeps into the pavement and collects in crevices. As soon as temperatures drop low enough, pooled water freezes and expands — which can warp pavement in the process. These cracks get larger with every melt and freeze, Sharifi says, creating perpetually more space for water to collect, freeze, and split apart the road.

Engineers have a few tactics that can keep roads in good shape longer, if their budget allows. One way to deal with moisture problems is to have construction crews install drains beneath or alongside roads to carry away water. If the road is made of cement that's cast in standard 15-foot sections, connecting joints can be better sealed to keep water out. Concrete roads can also be reinforced with steel bars during construction. But this intervention can often fail in icy areas that use a lot of salt, Sharifi says. Salt is notorious for corroding the underside of cars and road reinforcements made of steel.

While icy, cold areas deal with some of the worst road problems, warm-weather regions have their share of road woes, too. In places where heavy rain is frequent — think Florida or the Pacific Northwest — pavement can become saturated and less able to withstand the weight of passing vehicles. “Stress builds up because the water is not compressible,” Sharifi says. Over time, heavy moisture can cause roads to crack, which allows even more water to seep in and weaken the soil under the road. This might result in a pothole forming.

In general, warm weather causes asphalt and concrete to expand while cool temperatures contract them. In desert regions with scorching days and cold nights, repeated and drastic temperature swings can wear out roads sooner. Extreme heat also tends to make asphalt loose and flexible, making it prone to warping.

For decades, engineers have been able to predict the conditions a road will be exposed to in its lifespan. And over time, they've come up with new and improved design features. But as global temperatures rise, the data they've amassed on roads and long-term performance is becoming less applicable. “[Roads] are designed to operate under certain climate or weather conditions,” says Jennifer Jacobs, a civil engineer at the University of New Hampshire, Durham. “And if you change the climate or the weather conditions that those roads are subject to, then suddenly all bets are off.”

Several research groups, including Jacobs', have assessed how roads will cope in the coming years as projected temperatures shift. Focusing on changes in and around New Hampshire, Jacobs' team used climate change models to assess what daily average temperatures will be like in the coming decades. Overall, the trend showed that if daily average temperatures are eventually 4.5 degrees Fahrenheit higher than they were in the 1980s and 1990s, the New Hampshire “winter” will fade away and be replaced by a longer fall.

The team then inputted climate predictions into a computer program that transportation departments use to assess the longevity of planned road projects. Roads that are designed to last a few decades in New Hampshire's current climate would likely degrade much sooner if daily temperatures rise, Jacobs says. If the number of consecutive days cold enough to keep ice solid dwindles, this would accelerate the freeze, thaw and refreeze yo-yo that streets already endure. And when stronger heat waves hit in the future, the roads will be more likely to deform and develop ruts.

To resist the forces of climate change, the team recommends making asphalt layers 7 to 32 percent thicker, with layers getting heftier as temperatures rise. Boosting the volume of asphalt by a third costs more than $96,000 extra per mile, but it’s a worthwhile investment to make the road last longer, Jacobs says.

Engineers are also devising a range of other solutions to make streets crack and stress-resistant, Sharifi says, and this work includes everything from perfecting techniques for pouring asphalt to installing temperature-modulating pipes deep under the pavement. Jacobs also says states are coming around to looking forward, not backward, when using temperature data to design durable roads. “If we use that historical data, we're going to get the wrong answer,” Jacobs says, “and engineers don't really like to be wrong.”